"No Caption Needed" For This Pic Of Kriti Kharbanda? 100 Percent Agree 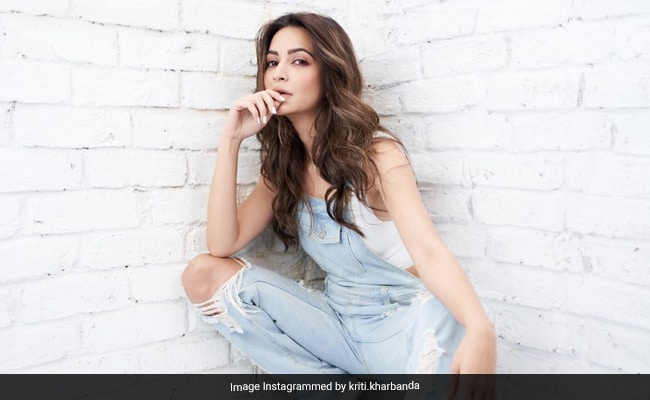 Kriti Kharbanda's latest Instagram post needs no caption because the picture does all the talking. The actress posted a throwback photo from Avinash Gowariker's photoshoot looking chic. Kriti paired a blue distressed denim dungaree with a white crop top for this session. The 30-year-old kept the makeup low-key to complete this casual streetwear style. The actress can be seen posing against a plain brick wall. Fans loved the pic and rained heart emojis in the comment box. Till now, the snap has garnered more than 2 lakh likes on the social media platform.

Earlier in the month, the model-turned-actress had uploaded some stunning snaps from the same series. But this time with witty captions. "Just standing there, looking at ya!" She also described herself as, "badass with a good heart, Soft but strong, unapologetic and honest." Kriti went on to call her "the type of woman you go to war beside, not against."

Kriti professed her love for actor Pulkit Samrat by calling him "Mera" in one of the latest posts. The couple, decked up in traditional attires, made fans melt in awe.

The pair celebrated the festival of colours with their friends Meenal Paliwal, Vaibhav Nagpal. The video has a montage of their happy moments with the close ones.

Kriti's last silver screen presence was with Pulkit in the web series Taish. It is directed by Bejoy Nambiar. Jim Sarbh, Sanjeeda Shaikh and Harshvardhan Rane are among the star cast. She will feature as the female lead opposite Dulquer Salmaan in the Tamil film Vaan. It also stars Kalyani Priyadarshan and Priya Bhavani Shankar.