The crew attending to Nia were equipped with Personal Protection Equipment (PPE) kits and other protective gear. 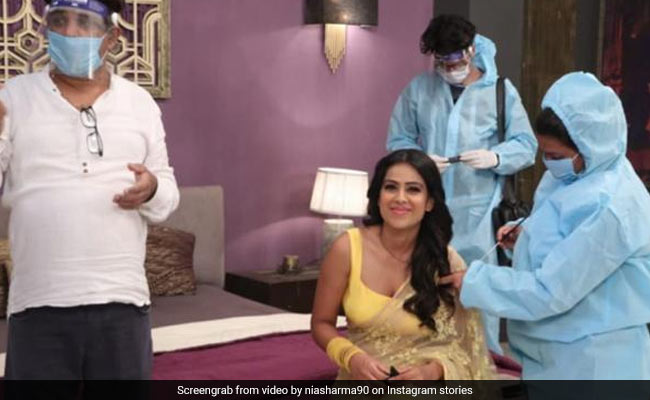 Nia Sharma on the sets of Naagin 4. (Image courtesy: niasharma90)

Actress Nia Sharma is back on the sets of Naagin 4 to shoot the finale of the Ekta Kapoor-produced shows. The actress shared pictures from the sets of the show, in which make-up artistes and the crew attending to Nia were equipped with Personal Protection Equipment (PPE) kits and other protective gear while the actress was dressed up in her character. The actress also shared pictures from her vanity van and she captioned it: "Cut to - three months later... back to set, my vanity!! #naagin4 (Jaan hatheli pe lekar)."

As of now, several TV shoots are underway while many were cancelled after the Federation of Western India Cine Employees (FWICE) and the Cine and Television Artists' Association (CINTAA) issued a joint statement asking producers to adhere to government stipulated safety measures with respect to the COVID-19 pandemic and clear the outstanding dues of all the artistes and technicians before resuming the shoot.

Earlier this week, CINTAA and FWICE shared 10 points, which all producers must comply by before resuming the shoot. Take a look:

Meanwhile, during the lockdown, Ekta Kapoor announced that she is scrapping Naagin 4 because she "messed up a bit." She promised to return with Naagin 5. "Naagin 4 is getting a fantastic end because you can't start from the middle in order to start a finish. So, we are ending Naagin 4 and then getting back to Naagin 5 immediately."

She added, "I messed up a bit and hope to make up to you all soon. Till then let's give everyone the best season 4 finale ever."

The update on nagin4/5! @MuktaDhond@BTL_Balaji@anitahasnandani@TanusriDasGupta@Theniasharma@jasminbhasin@ChloeJFerns@ColorsTV#MrinalJhapic.twitter.com/aL5d6tM6Cx