New Pics: This Is How Much Fun Miheeka Bajaj And Rana Daggubati Had At Their Wedding 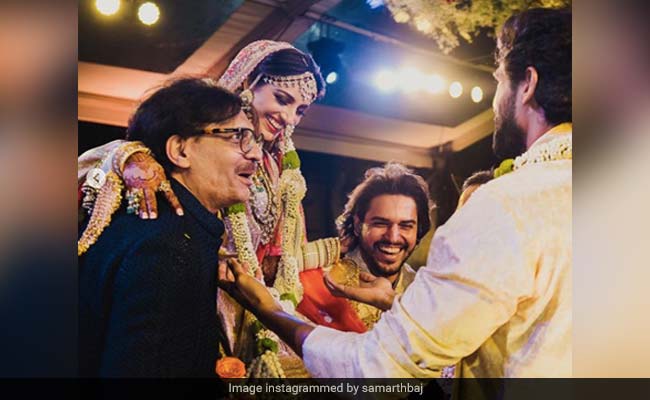 Actor Rana Daggubati and Miheeka Bajaj's intimate wedding is keeping the Internet busy days after the event. Miheeka's brother Samarth Bajaj shared new pictures from the wedding which will make fans of the couple happy. In a black-and-white picture, Rana Daggubati can be seen giving Miheeka an one-armed squeeze as she smiles. In another picture, the couple can be laughing heartily while posing and in the third picture, we get a glimpse of what happed during the varmala - a playful moment, courtesy Miheeka's father and brother. Samarth Bajaj captioned the post: "Presenting my friend, philosopher and guide as a bride. Words fall short to describe the love I feel for the two of you. Wishing you a lifetime of happiness and togetherness."

Presenting my friend, philosopher and guide as a bride. Words fall short to describe the love I feel for the two of you. Wishing you a lifetime of happiness and togetherness . @ranadaggubati @miheeka #bajaoed

Rana Daggubati and Miheeka Bajaj got engaged in May and they got married on August 8 in Hyderabad's Ramanaidu Studios in the presence of their family. Their other friends and relatives got to be a part of their big day through virtual reality. For the wedding, Miheeka Bajaj wore an Anamika Khanna ensemble with polki, emerald and pearl jewellery. She looked stunning while Rana Daggubati looked fabulous in traditional outfit.

Rana Daggubati, son of producer Daggubati Suresh Babu, is best-known for his portrayal of Bhallaladeva in SS Rajamouli's Baahubali series. He has also featured in movies such as The Ghazi Attack, Baby, Rudramahadevi and Leader.