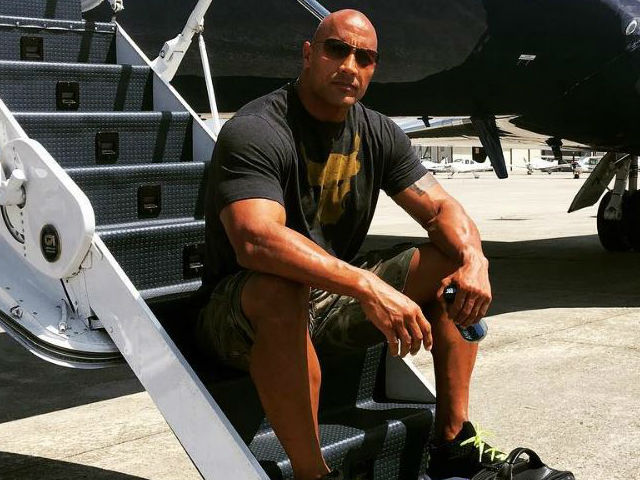 This image was posted on Facebook by Dwayne The Rock Johnson

New Delhi: Actor Dwayne Johnson shared the first look of his character from upcoming film Jumanji on his social media platforms on Friday.

The 44-year-old actor introduced his character Dr Bravestone with the concept art and captioned it as:

EXCLUSIVE FIRST LOOK: Concept art of my #JUMANJI character. "The Smoldering" Dr. Bravestone. (not sure where my pecs went;). This is gonna be fun.. Me, @kevinhart4real, Jack Black, @NickJonas and the Ginger Assassin @karengillanofficial can't wait to "play the game that plays you". #JUMANJI #DrBravestone #KingOfTheSmolder #TheAdventureContinues * JUMANJI Costume Designer Laura Jean Shannon

This film is not a remake of Joe Johnston's 1995 film of the same name. The former wrestler, also known as The Rock explained in an earlier Instagram post that it will be a "continuation of the awesome Jumanji adventure 20 years later."

He said that there will be a "whole new generation to the fun and crazy Jumaji universe," but they'll honor the legend of Alan Parrish, the hero of the 1995 film, played by Robin Williams.

Promoted
Listen to the latest songs, only on JioSaavn.com
Here's what The Rock said:

Yo.. Lots of positive chatter now on something I should've clarified months ago when we announced we were making JUMANJI. This new movie will NOT be a remake or reboot of the original. It will be a CONTINUATION of the awesome JUMANJI adventure 20 years later. As a producer on this movie and someone who loves the original, you have my word we'll honor the legend of "Alan Parrish" and properly introduce a whole new generation to the fun and crazy JUMANJI universe that so many of us loved and grew up on. Our director Jake Kasdan and lead producer Matt Tohlmach are focused and ready go. They also have no f*cking idea what they've gotten themselves into by hiring Me, Kevin Hart and Jack Black aka "The Cray Cray Triplets" as the stars of this movie. Shooting begins in 4 weeks. And on a personal note, it's such a cool thing for me to bring the production of this movie to Hawaii. The positive ripple effect it has on local businesses and families in terms of creating jobs and additional income makes me very happy. I grew up on the island thru hard times and good times, so it means a lot to this local boy. Hell, I used to steal a Snickers candy bar every day from 7-11 when I walked to the gym as my pre workout meal when I was 14yrs cause I was too broke to buy one. When I return to Hawaii, I will go back to that 7-11 (on Kapiolani Blvd) and finally buy that Snickers bar after all these years. Then I'll proceed to my psychiatric therapy session cause clearly I'm still messed up over that broke time in my life. #JUMANJI #HAWAII #SonyPictures #SnickersForTheWholeCrew