Neena Gupta's Frock 2.0. Worn With 'Shoes Borrowed From Masaba And Body From God'

Neena Gupta shared a glimpse of her last night's look, sharing details of her sartorial choices in a hilarious caption 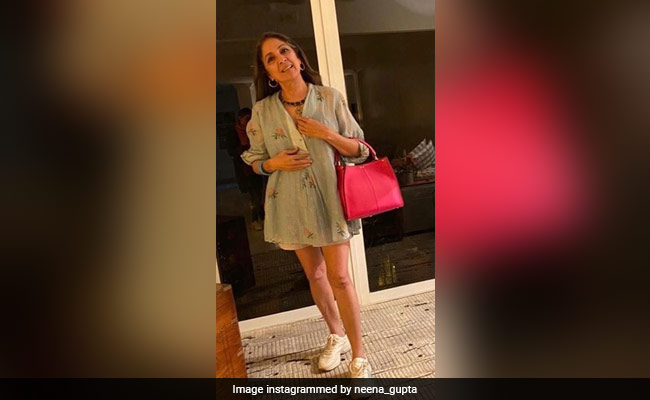 Remember Neena Gupta's viral "frock ka shock" photo? Neena Gupta did it again. The 60-year-old actress stepped out in a "frock" again and we absolutely love her look. Neena Gupta, who will soon be seen in Shubh Mangal Zyada Saavdhan, went to a party with the film's cast and crew, dressed in a frock-like, flared top paired with shorts and white sneakers (courtesy her designer daughter Masaba Gupta). She shared a glimpse of her last night's look, sharing details of her sartorial choices in a hilarious caption. As accessories, Neena Gupta picked a pop pink tote and a neckpiece. "Necklace from my hard-work, frock by Pero, shoes borrowed from Masaba, bag from my husband, body from God," read her ROFL post. Masaba is Neena Gupta's daughter with former West Indies cricketer Vivian Richards. from when they were in a relationship. The Badhaai Ho actress is married to Vivek Mehra since 2008.

Shubh Mangal Zyada Saavdhan producer R Balki also shared a priceless moment from last night's get-together with a special note for Neena Gupta and Gajraj Rao: "With two real genuine people." The pairing of Gajraj Rao and Neena Gupta as a middle aged couple in Badhaai Ho turned out to be a huge hit.

BTW, here's the "frock ka shock" photo we were talking about that sent the Internet into a tizzy.