In the photos, Nayanthara looks gorgeous in a blue suit 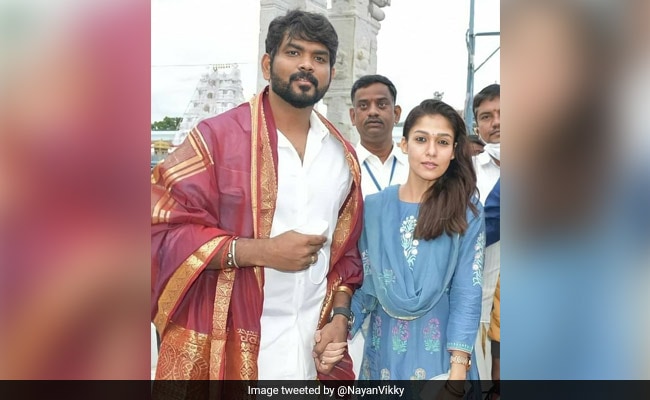 Nayanthara and her fiancé, filmmaker Vignesh Shivan, featured on the trends list on Monday after the couple visited the Tirumala Tirupati temple in Andhra Pradesh. Pictures and videos of the duo from their recent visit to the temple have gone viral on social media. In the trending photos, Nayanthara looks gorgeous in a blue suit while Vignesh Shivan can be seen sporting a white kurta set, which he paired with a red shawl. The couple dated for a few years before getting engaged. See viral photos and videos of Nayanthara and Vignesh Shivan from their visit to the Tirumala Tirupati temple.

Nayanthara and Vignesh Shivan fell in love while working together for the 2015 film Naanum Rowdydhaan, which Vignesh directed. It featured Nayanthara in the lead role.

Earlier this month, Vignesh Shivan celebrated his 36th birthday with Nayanthara. He shared pictures from his surprise birthday party and they are everything nice. "Thank you #Thangamey for the pleasant surprise birthday and the unmatchable gift of your presence in my life! Thank you dearest friends for your love and blessings as always," he wrote in the caption. Take a look at his post.

In terms of work, Nayanthara was last seen in Netrikann, a remake of Korean film Blind. It was directed by Milind Rau and produced by Vignesh. She will next be seen alongside Rajinikanth in Annaatthe. The actress also has Kaathu Vaakula Rendu Kaadhal, Atlee, Godfather and Gold lined up.

Vignesh Shivan has not announced his upcoming project yet.