What Navya Naveli Nanda Calls An "Average Work Day." We Should Be So Lucky

The entrepreneur was accompanied by two of her friends in the photo. 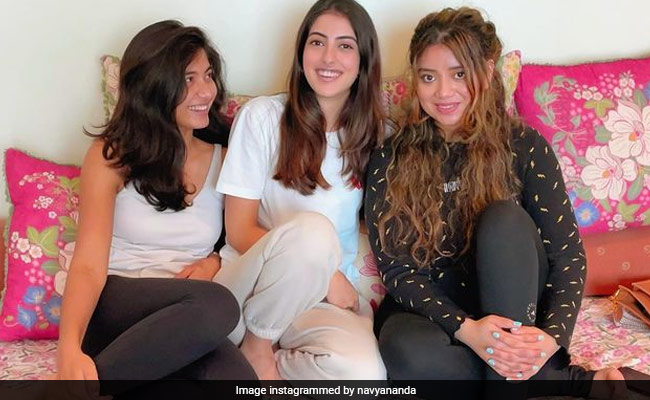 Navya Naveli Nanda is an entrepreneur to watch out for. With legendary acting icons Amitabh Bachchan and Jaya Bachchan as her grandparents, Navya has grown up with media and public attention. Given the popularity of her family, it is natural for fans and followers to have an added interest in her activities and she uses her social media presence to talk about issues that matter. By backing and founding initiatives that focus on healthcare and gender rights, Navya has earned a social media fan base that is devoted to her for all the right reasons.  Navya, who is a co-founder of Aara Health and the NGO Project Naveli, recently gave us a sneak peek of what a day at work looks like.

It comes as no surprise that Navya is seen in the photo with two other women friends and colleagues. That's some girl power, isn't it? Dressed in a casual white T-shirt and beige pants, Navya looks lovely as ever as she shares a couch with her friends. Her caption said, “An average workday...”

Reacting to the image, designer Maheep Kapoor left a heart emoji in the comments section. Maheep Kapoor is the mother of Shanaya Kapoor, a close friend of Navya's.

Recently, in another photo, Navya let her printed T-shirt do all the talking. The caption on it said, “Girls are great.” And everyone from actress Janhvi Kapoor's sister Khushi Kapoor to Maheep Kapoor seemed to agree and left heart in the comments.

Her spirited initiatives aside, the entrepreneur also gives us glimpses of her talents on social media. A while nack, she shared a video of herself playing the piano. In the caption, she interacted with her followers and wrote, “10 points for guessing the song…” Given how well she recreated the tune it was not tough for many to guess that it was the soundtrack from the show Downton Abbey. While director Zoya Akhtar couldn't help herself from saying, “Too good,” Navya's doting father, businessman Nikhil Nanda flooded the comment section with hearts.

Navya Naveli Nanda is the daughter of writer-entrepreneur Shweta Bachchan and Nikhil Nanda. The couple also has a son named Agastya.