Filmmaker Rahul Rawail, the head of this year's National Awards jury, wrote and then deleted two Facebook posts about receiving alleged hate mail from fans of Malayalam superstar Mammootty. The 67-year-old actor, his fans felt, should have been awarded the Best Actor prize for his performance in Peranbu. In his now deleted posts, Mr Rawail revealed that he messaged Mammootty about the hate mail and that the actor apologized to him on behalf of his disgruntled fans. The list of winners of this year's National Awards were announced last Friday; Vicky Kaushal and Ayushmann Khurranna share the Best Actor honour for their performances in Uri: The Surgical Strike and AndhaDhun respectively.

The Hindu reports that Mammootty, a three-time National Award Best Actor winner, was considered a strong contender for the top prize this year. Upset fans trended the hashtags #JusticeForMammootty and #PeranbuDeservesNationalAward after the actor failed to win. Screenshots of Rahul Rawail's Facebook posts - which appear to have been deleted two hours after being posted - are circulating online; they reveal that his message to Mammootty not only alerted the actor to the alleged campaign of abuse against Mr Rawail, but also the reason Peranbu and Mammootty were overlooked in the honours list. Mr Rawail wrote: "Message sent by me, as Chairman of the Jury of 66th NFA, to Mammooty: 'Hi Mr Mammootty. There has been a lot of 'hate mail', that too extremely nasty, that I have been receiving from your fans, or so called fan clubs, as to why you were not given the National Award as Best Actor for the film 'Peranbu'."

Mr Rawail clarified on behalf of the jury: "Let me set the record straight: Firstly, nobody has the right to question a jury decision. Secondly, your film 'Peranbu' had been rejected by the Regional Panel and hence did not contend in the Central Panel. Your fans and/or devotees should stop fighting a lost cause. Never question a jury!" 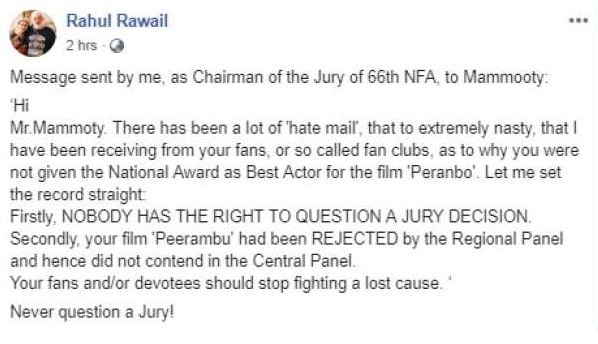 In another post, also deleted, Rahul Rawail shared Mammootty's response to his message, in which the actor apologised for his indignant fans: "Reply from Mammootty: 'Sorry sir. I have no knowledge about it. Still I apologize for what had happened'."

Directed by Ram, Mammootty's performance in Peranbu as the distraught father of a specially-abled daughter has received wide acclaim.

The National Awards have a way of causing heartache over the choice of awardees. Not too long ago, a jury headed by Priyadarshan picked Akshay Kumar as Best Actor in a year that had seen performances such as Aamir Khan in Dangal and Manoj Bajpayee in Aligarh, causing an uproar.