Nargis Fakhri Is "Struggling" To Keep The Hula-Hoop Going. We're Not Saying It, She Is

Set to the viral song Banana, the video was captioned by Nargis Fakhri in these words: "No comment. I need practice." 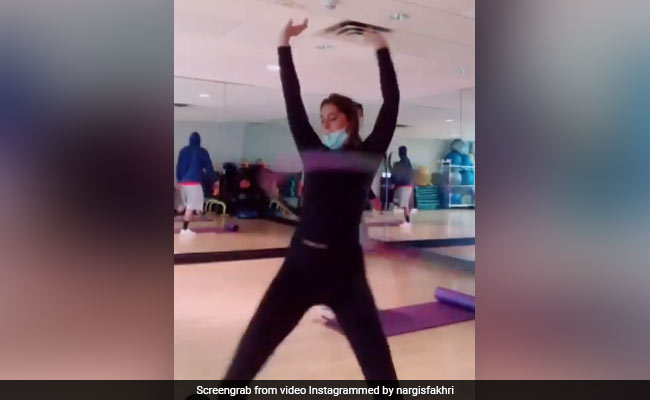 Nargis Fakhri In a still from her video (courtesy nargisfakhri )

Actress Nargis Fakhri thinks she needs to work on her hula-hooping skills and we don't completely disagree. Nargis Fakhri is known for her goofy videos and on Wednesday morning, she added one more to the list. The video shared by the Rockstar actress is one more her work-out sessions, starring a hula-hoop. In the video, Nargis visibly struggles to keep balancing the hula-hoop, to which she gave an ROFL twist and shared it as a fun Instagram video. "Me struggling to keep it going. Meanwhile, this guy is killing it," she wrote in the video. Nargis is joined by who appears to be her boyfriend chef Justin Santos in the video, who does a fantastic job with the hula-hoop.

Set to the viral song Banana, the video was captioned by Nargis Fakhri in these words: "No comment. I need practice."

Looks like Nargis Fakhri is just discovering some viral trends which took over social media in the recent past. Diagnosis with COVID-19 in February, here's when she joined the "pawri" trend: "My party - I know the dance moves are. And my party partner is lit," she wrote.

Nargis Fakhri made her acting debut with Imtiaz Ali's 2011 film Rockstar, in which she co-starred with Ranbir Kapoor. She is also known for her roles in films such as Madras Cafe, Main Tera Hero, Azhar, Housefull 3 and Banjo. In 2018, she starred in the American movie 5 Weddings and was last seen in 2020 action thriller Torbaaz, which released on Netflix. In 2016, Nargis Fakhri abruptly left Mumbai and moved to the US, fanning rumours of a speculated split with actor Uday Chopra, who she was rumoured to be dating.