In Na Shukre, Kalki Koechlin and Richa Chadha are enjoying their trip to Sweden 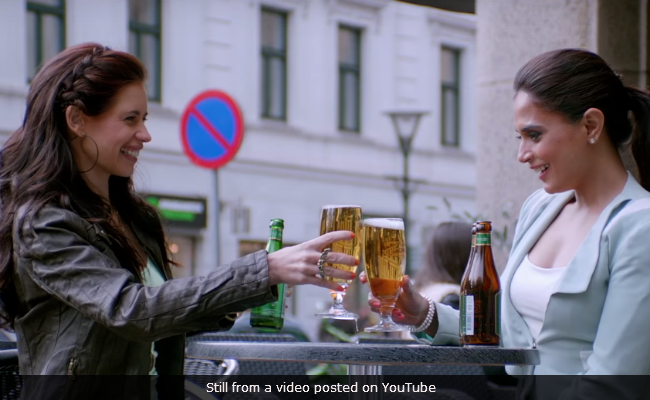 New Delhi: Actresses Richa Chadha and Kalki Koechlin, who are all set for their upcoming film Jia Aur Jia, delighted their fans by unveiling the first song from the film titled Na Shukre. Kalki shared the song on Twitter and wrote: "Here we are with our first song. The ungratefools." The song depicts Jia and Jia's (played by Kalki and Richa) fun journey together. From enjoying the cool breeze on a road trip and ticking off places and things-to-do in Sweden one by one to having beer together, Richa and Kalki can be seen doing it all in Na Shukre. The girls can be seen enjoying their trip to the fullest in the song. Na Shukre is sung by Smita Malhotra.


The team of Jia Aur Jia has also decided to revamp an old Hindi song Jia ho... Jia oh Jia kuch bol do from the 1961 film Jab Pyar Kisi Se Hota Hai, starring Dev Anand and Asha Parekh. The old classic was originally sung by Mohammed Rafi. The new version of the song is composed by Nisschal Zaveri and is sung by Jyotika Tangri. It will also have bits from the original Rafi version as well, reports IANS.


Apart from Jia Aur Jia, Richa Chadha will also feature in a sequel to her 2013's Fukrey, in which she played the role of Bholi Punjaban.

Promoted
Listen to the latest songs, only on JioSaavn.com
Jia Aur Jia is produced by Mirza N Askari and is presented by Blue Fox Motion pictures Pvt Ltd. Directed by Howard Rosemeyer, it will release on October 27.