Mouni Roy Is "Hopelessly Flawed." Are You Listening, Trolls?

Mouni Roy was recently trolled for not wearing "proper Indian cultural clothes." She replied with a picture captioned: "Hopelessly flawed" 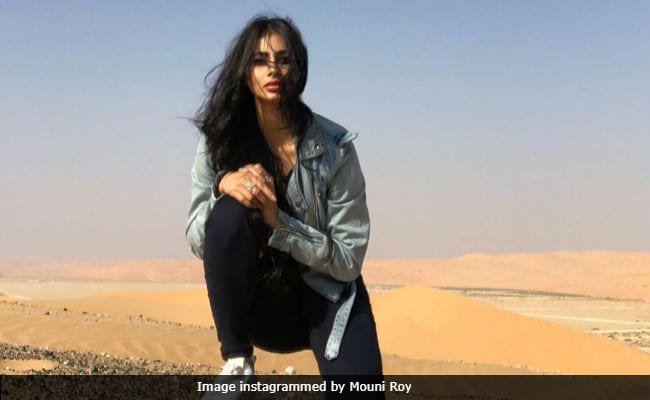 Mouni Roy is on a vacation. (Image courtesy: Mouni Roy)

New Delhi: Actress Mouni Roy's got sass and swag. The actress was recently trolled for wearing an off-shoulder gown (by no less than Swanip Shinde, folks). She was asked to wear "proper Indian cultural clothes." A day later, Mouni posted a new picture in a different outfit (still not "proper Indian cultural clothes" some may say) and in a different setting. Mouni is spending the New Year in a desert area from where she posted a picture, in which she's dressed in leggings and denims jacket and captioned it: "Hopelessly flawed." She was cheered on by colleague Shibani Dandekar, who commented: "Flawless, baby girl."

Take a look at Mouni's latest picture from the desert:

Here's the picture for which Mouni was trolled:

Mouni Roy is transitioning from television to films in Akshay Kumar's Gold. The Reema Kagti-directed film is a fictionalized retelling of how India won the first Olympic medal as a free nation in 1948 in Hockey. Mouni has also signed up for Karan Johar's Brahmastra, which is a trilogy starring Amitabh Bachchan, Ranbir Kapoor and Alia Bhatt.

Before films, Mouni became a household name by starring in Ekta Kapoor's Kyunki... Saas Bhi Kabhi Bahu Thi. She has also featured in K-soaps like Kasturi. Her next big television role was that of Sati in Devon Ke Dev...Mahadev. She ruled the television TRPs as Naagin from 2015 to 2017.
Comments
mouni roymouni roy trolledmouni roy films