Ali Fazal Aka Guddu Pandit's Special Note To Mirzapur Season 3 Team: "You All Have Helped Me In..."

Ali Fazal has shared a video with the team of the web series. 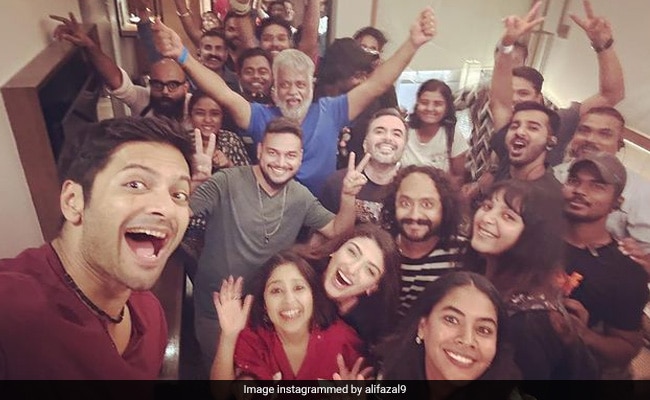 Here's some good news for Mirzapur fans. Ali Fazal has shared that the shoot for the third season of the popular Amazon Prime Video show has been completed. Marking the milestone, the actor shared a celebration video on Instagram in which he is seen with co-star Shweta Tripathi Sharma and the rest of the team. This is followed by a happy selfie of the team. Ali Fazal, who plays Guddu Pandit in Mirzapur, also attached a heartwarming note dedicated to the team. He wrote: “To my most dearest and loved team, thank you so much for the love and hardwork you brought to the world of Mirzapur. Season 3 has been a very different journey for me, as have the other two seasons.”

Thanking his team, Ali Fazal said, “But you must know I say this because I and Guddu Pandit derive every ounce from every person working on those sets to help build what you eventually see out there. You may not realise it but you all have helped me in ways I cannot write down. I only hope you all get to read this because I don't have everyone's tags. So here's my thank you. Sorry this time I couldn't pen my personal letters to the team.”

Further, Ali Fazal added, “To my co actors - you know you are the best. And you know how much I love you. Lastly, thanks Amazon. Excel. And mostly my man Guru, for directing the coolest show.”

Shweta Tripathi Sharma replied to the post saying, “Sirf aur sirf (only and only) (heart emojis).”

Before the shoot began in May, Alia Fazal had shared a post about getting back into the skin of the beloved role. He said, “And the time begins! Prep, rehearsals, readings. Bring it on...Laathi lakkad nahi, ab neeche se joote aur upar se bandookein fire hongi. Lagao haath kamaao kantaap! Guddu aarhe hain .. apne aap. (This time, battles will be fought through guns and not sticks. Touch me and you earn yourself a slap. Guddu is coming)."

A few days ago, Shweta Tripathi also shared a video upon wrapping her shoot for the show. In the clip, the actor, who plays Golu in Mirzapur, wrote, “I couldn't wait to start shooting as soon as I finished reading the episodes for season 3. And now that we've completed shooting, I can't wait for all of you to watch it. Wrapped a little piece of my heart. It's been one hell of a challenging and fulfilling ride. She's one of the bravest, toughest and most endearing girls I've met. And I love her!! And this cast and crew and the biggest gems @gurmmeetsingh @kapoorbaba #SeasonWrap #Mirzapur3 #MS3W.”