The comedian shared a photo from a day when Rishi Kapoor and Neetu Kapoor were his guests on his talk show. 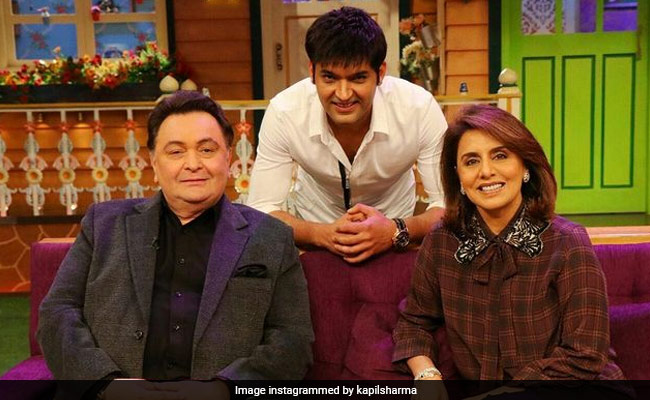 Kapil Sharma, the Indian stand-up comedian, has given many moments of laughter and merriment to Indian households since his television talk show first aired in 2016. But, there are days when the comedian shares something more than jokes with his fans. Snippets of nostalgia often get hold of him and he puts it up on social media. This time, for Kapil Sharma, nostalgia is a throwback photo of the late legendary actor Rishi Kapoor and his wife, actress Neetu Kapoor. The photo on Instagram shows the comedian with the celebrity couple when they showed up as guests on his talk show in the past.

Rishi Kapoor and Neetu Kapoor are seen sitting on the show's couch beside each other as they smile at the camera. No one can contest the fact that the star couple always shared a spark until Rishi's death last year in April. The photo shows us the glee on Kapil Sharma's face to be amidst them both. He wrote in the caption, "One of my favourite pictures with both my favourites." He added a red heart emoji and his hashtags read, "memories for life."

This isn't the first time that the comedian has been amidst celebrities of the bygone Bollywood era. On the day of actor Dilip Kumar's death, he paid homage to the legend by sharing a photo where Kapil Sharma is seen with the legend and his wife, actress Saira Banu.

Kapil Sharma welcomes many celebrities on his show. Earlier in January, the comedian had also shared a clip from his show when actor Raj Babbar and actress Jaya Prada became his guests. In the video, the celebrities seem to have a good time while Kapil Sharma launches himself into a flurry of praises for the actress.

Kapil Sharma stays close within the Bollywood circuit and shows much love if it's the birthday of a loved actor. On Govinda's birthday, he shared a photo with the actor and his wife Sunita Ahuja. We did not miss catching the peppy dance vibes that the three shared while posing for the photo.

In a recent post, the comedian spread awareness towards covid vaccines. In the picture, we can see Kapil Sharma with his show crew standing behind a board reading, "I am covid-19 vaccinated." Kapil Sharma captioned the post, "Are you?"

With this comedian, the many streaks of Bollywood life reach fans with joy as well as a tinge of nostalgia.

Karan Johar And Bigg Boss, Here's Why This Combo Is Trending