For those who don't know, Domlur is a small town in the eastern part of Bangalore 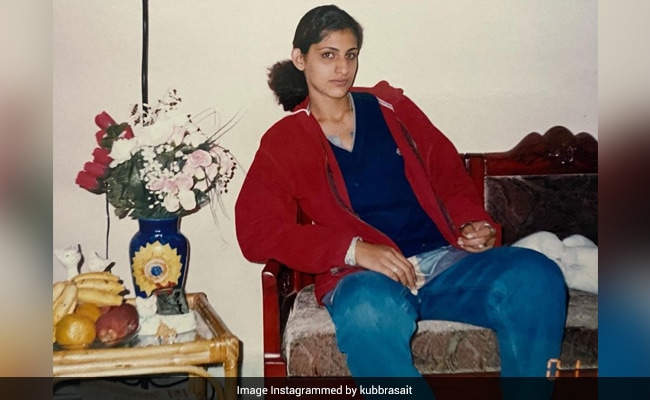 Kubbra Sait, in a throwback state of mind, shared an epic photo of herself from when she was living in Bangalore. The Sacred Games actress, on Tuesday, introduced us to her younger self with these words - "Domlur Ka Goonda." For those who don't know, Domlur is a small town in the eastern part of Bangalore. In the photo, Kubbra can be seen sporting a blue tee, jeans and red jacket and sitting on a sofa like a "rowdy" while posing for the camera. "Domlur ka goonda. #KeepingItReal #Throwback #SorryNotSorry," the actress wrote in the caption of her post. Reacting to Kubbra's photo, actress Elli Avrram commented: "Such a babe" while a fan wrote: "Rowdy look, before meeting Gaitonde." LOL

On Monday also, Kubbra posted a super cool throwback photo of herself and wrote: "Don't mess with a person who wears a fake diesel t-shirt for a passport photo. I am ultimately LIT AF."

Kubbra Sait was last seen in Dolly Kitty Aur Woh Chamakte Sitare. Before that, she co-starred with Saif Ali Khan, Tabu and Alaya Furniturewalla in Jawaani Jaaneman. She has starred in web-series like Fourplay, TVF's Tripling 2, The Verdict - State vs Nanavati and Going Viral Pvt Ltd. Kubbra has also featured in a number of films such as Ready, Jodi Breakers, Sultan, Gully Boy and Dolly Kitty Aur Woh Chamakte Sitare.

She became a household name after she starred in Sacred Games, in which Nawazuddin Siddiqui and Saif Ali Khan played the lead roles.

Another Day, Another Post From Sara Ali Khan's Maldives Diaries