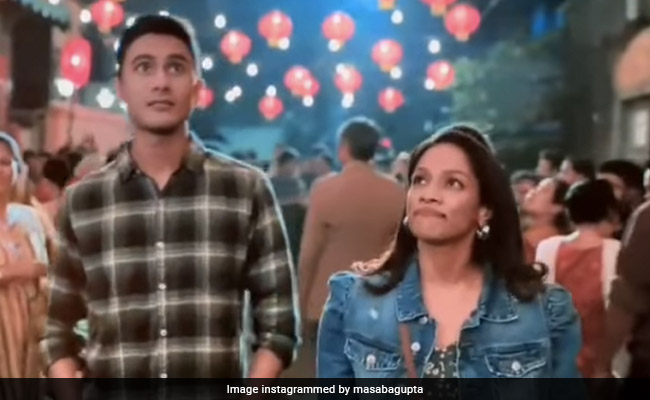 Masaba Gupta in a still from the video. (courtesy: masabagupta)

Masaba Gupta is bathing in all the love pouring forth for Modern Love Mumbai. The anthology series, which is an Indian spin-off of the popular US series, features Masaba and Ritwik Bhowmik in a chapter titled I Love Thane. And, the spark of this on-screen couple has surely won over Masaba's fans. While viewers are enjoying the show, Masaba herself is quite hooked on it. How do we know? She has posted a glimpse of the series. And, it turns out to be one of her favourite scenes from the series. The scene was shot on Vishal Bharadwaj's set for the episode Mumbai Dragon. The loud and peppy sequence ends with a one-on-one conversation between Saiba (played by Masaba) and Parth (played by Ritwik).

Masaba Gupta's caption is a gem. It read, “This little snippet is one of my fave parts of the show, shot on Vishal Bharadwaj Ji's ( Mumbai Dragon ) set one night.” She added, “I love how beautifully it captures the stories coming together, intertwining and tying everything together in a nice little bow that wraps up the series.” If that wasn't enough, Masaba added, “I also found some notes from when I was prepping to get into the role of Saiba.”

Masaba Gupta keeps showing us her funky side through her Instagram posts. She shared a humorous video on Instagram that featured Modern Love Mumbai actors Meiyang Chang, Ritwik Bhowmik, Pratik Gandhi and herself. The post was all about Gen-Z jargon and the actors had to show whether or not they are familiar with these terms. No doubt, the session ended in hilarious ways. Masaba captioned it, “A quick hack to gen-z lingo (so you'll be more prepped than I was).” Take a look: