Masaba Gupta posted a happy picture with dad on Instagram 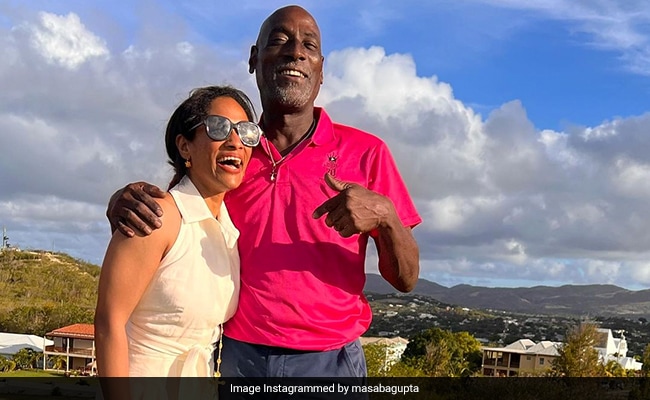 Masaba Gupta's latest Instagram post is all about happy faces - hers and her cricketing legend father Viv Richards. The designer-actress can be seen flashing an ear-to-ear grin as she stands next to her father. Viv Richards turned 70 in March but Masaba shared pictures from the celebrations after two months. She captioned the post: "To celebrate dad's 70th birthday in Antigua - a golf tournament ( where he is happiest after a cricket field ) for charity to raise money for healthcare workers in the region who have worked tirelessly through the pandemic."

On her dad's birthday on March 7, Masaba Gupta posted a childhood throwback with her dad and she captioned the post: "I'd like to think I've picked up some of most powerful qualities from my parents. My father is unrelenting, focused, has lived his life in the pursuit of greatness, defied the odds, turned around his fate and spent his whole life to become a mental and physical force to reckon with. 'All you got is yourself ' - I cannot explain how true this last line is and I see it come to life every single day as I set out in my pursuit to be even half as great as you - mentally and physically. Happy 70th birthday papa."

Masaba Gupta was last seen in the Netflix smash hit Masaba Masaba, a semi-fictionalised show inspired by the lives of Masaba Gupta and her actress-mother Neena Gupta. The second season of the show will release this year. Masaba also featured as one of the judges on the TV reality show MTV Supermodel Of The Year. She will soon be seen in Amazon Prime Video's series Modern Love Mumbai. Priyanka Chopra, Alia Bhatt, Sonam Kapoor, film producer Rhea Kapoor and many other Bollywood stars, including Masaba's mother Neena Gupta, swear by her designs.