Mandana Karimi On Ishqbaaaz: 'I Was Fascinated With Being On A TV Set' 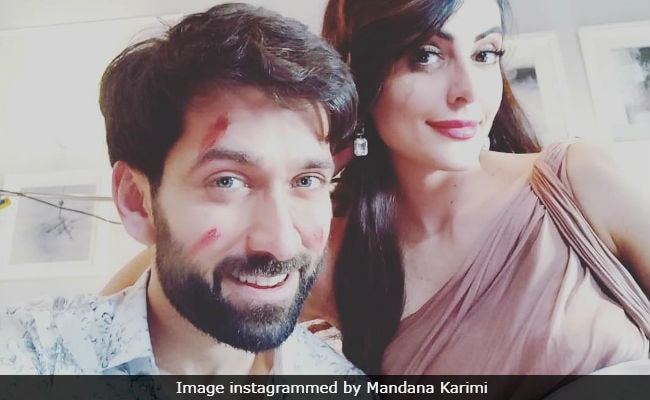 Mandana Karimi and Nakuul Mehta on the sets of Ishqbaaaz. (Image courtesy: Instagram)

Mandana Karimi is all set to debut on the small screen in a fictional show and she appears to be quite thrilled about it. From posting promos of the intriguing twist she brings to the plot of Ishqbaaaz to talking about shooting for her first television show, Mandana Karimi is definitely making the most of it. Speaking about the show and the experience of filming a fictional soap, Mandana told Mumbai Mirror: "More than the character, I was fascinated with being on a TV set. It's interesting to shoot for something that will air the very next day. You dub for it on the set itself and it's quite a challenge. Nancy will create a lot of confusion between the leads and in their family. She is sexy and seductive, strong and independent, the kind of girl who gets what she wants, no matter what it takes."

In the latest promo of Ishqbaaaz, Mandana is found dead and the show's lead Shivaay (played by Nakuul Mehta) appears to be her killer. Mandana plays the role of Nancy, whom Shivaay and his family met at a party and later she is found dead in the room where Shivaay wakes up. "The promo shows me dead, so I joked that he's (Nakuul) so good-looking that his dropdead gorgeous looks have killed me already," Mandana told Mumbai Mirror.

Watch the promo of Ishqbaaaz:

Apart from Ishqbaaaz, Mandana is awaiting the release of a film co-starring Rahul Bose, Tisca Chopra and Ronit Roy. Though she's filmed parts of it, Mandana refused to divulge details of the project.

Mandana Karimi recently featured in headlines because of her bitter separation from her husband Gaurav Gupta.