"Happy to be part of the Disney Family," wrote Aishwarya Rai Bachchan 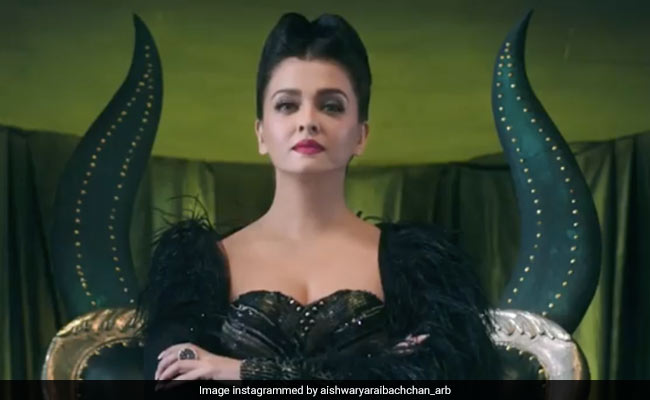 Aishwarya Rai Bachchan in a still from the teaser. (Image courtesy: aishwaryaraibachchan_arb)

Aishwarya Rai Bachchan, who has been finalised to dub for Hollywood star Angelina Jolie in the Hindi version of upcoming film Maleficent: Mistress Of Evil, shared the teaser of the film on social media on Wednesday and her fans can't keep calm. In the teaser, Aishwarya can be seen killing the Maleficent look like a pro. She looks stunning in an all-black ensemble with her hair styled in a double French roll. The teaser also features glimpses of Angelina Jolie and Elle Fanning from Maleficent: Mistress Of Evil. Sharing the teaser, Aishwarya Rai captioned it: "Maleficent. Happy to be part of the Disney Family."

The teaser is going crazy viral on social media as within an hour, it received over one lakh likes on Instagram. Excited much to watch it? Check it out:

Happy to be part of the DISNEY Family

A post shared by AishwaryaRaiBachchan (@aishwaryaraibachchan_arb) on Oct 1, 2019 at 11:57pm PDT

Sharing the teaser, Abhishek Bachchan praised his wife in the coolest way possible. "How cool is this!" he tweeted.

Maleficent: Mistress Of Evil is a sequel to 2014 film Maleficent, which featured Sharlto Copley, Juno Temple, Imelda Staunton and Sam Riley along with Angelina and Elle. The Disney film was based on the classic fairy tale The Sleeping Beauty.

Speaking about selecting Aishwarya Rai Bachchan for the Hindi version of the film, Disney India Head Bikram Duggal told news agency IANS: "Looking at how Angelina Jolie fits Maleficent's role down to the letter, it was hard to imagine anyone else essaying the character other than Aishwarya Rai Bachchan for our local audience. We wanted to bring her character to life in Hindi and felt Aishwarya's persona, which is filled with elegance and poise, would be a perfect blend."

Maleficent: Mistress Of Evil is slated to open in theatres across India in English and Hindi on October 18.