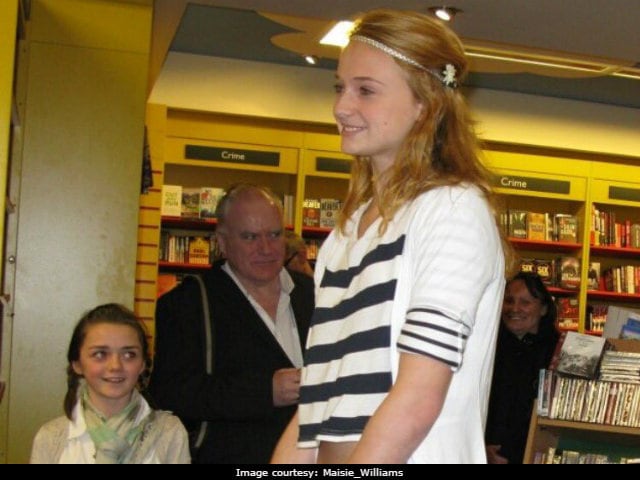 Maisie Williams and Sophie Turner are co-stars of Game Of Thrones (courtesy: Maisie_Williams)

New Delhi: Actress Maisie Williams fetched a priceless piece of photograph from her Game Of Thrones archive to ensure that her birthday wish for Sophie Turner is a unique one. Sophie blew 21 candles out on her birthday on Tuesday, when Ms Williams tweeted: "Happy 21st Birthday Sophie Turner. Forever looking up to you, in more ways than one." Ms Williams and Ms Turner are co-stars of Game Of Thrones, in which they feature as daughters of the celebrated Stark family of Winterfell. Ms Williams is cast as the feisty and revengeful Arya Stark while Sophie plays the role of her elder sister Sansa. Sansa and Arya are estranged mid-way through the historical drama series and are still awaiting a reunion.

All those aside, the throwback picture of Maisie Williams and Sophie Turner, possibly at a Game Of Thrones event held in a book store, will make your Friday a lot brighter. We cannot really say exactly when this photograph was taken but what we can mention is Ms Williams was 13 and Ms Turner was 15 when Game Of Thrones debuted in 2011.

Ms Williams clearly appears to be in awe of Sophie, who looks uber-cute in a pair of denims and crop top.

Happy 21st Birthday @SophieT
Forever looking up to you, in more ways than one pic.twitter.com/43cCih2KeJ

Promoted
Listen to the latest songs, only on JioSaavn.com
Game Of Thrones fans are awaiting the release of Season 7 of the popular fantasy series, which is expected to start this year. Earlier this month, Ms William said that she finds spoilers to be rather "annoying and childish," reported Express.co.uk. "It really, really upsets me, because, there's only a certain group of people who would look at that anyway, compared to the audience that watches the show. It hurts. It's just like, oh we wanted to tell this story, and yeah, lots of people don't want to read it, and don't want to look at it. But then it's even more annoying when you know (the leaks) might be from someone on the inside, and it's just like. You're trying to make something really cool, that is really cool, and people really like, and it's like 'Stop ruining it'. It's such a childish, annoying thing to do. And yeah, it's sad. It really annoys me," she said in her interview to Express.co.uk.