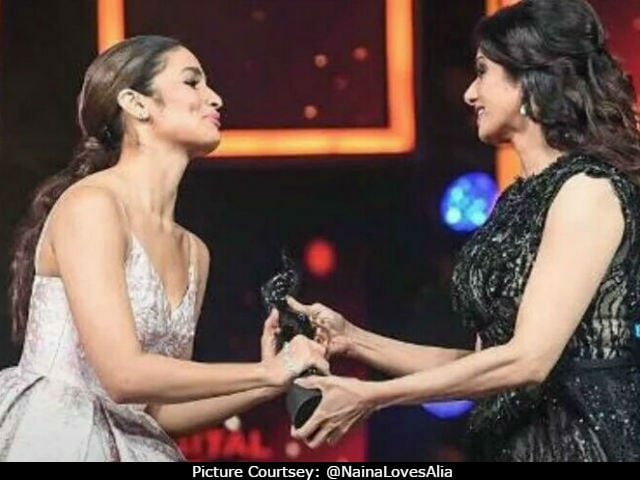 New Delhi: What best could it be for a father to see his daughter touching the sky? Mahesh Bhatt went through the same feeling when Alia Bhatt received Best Actress Filmfare Award for her outstanding performance in Udta Punjab, especially from Sridevi. The director-father of the 23-year-old actress called the veteran actress an "outstanding actor star" in his tweet. Mahesh Bhatt re-tweeted a photograph of Alia receiving an award from Sridevi and wrote: "Such a gratifying image. Sheer joy to see you receive an award from Sridevi. She is an outstanding actor-star." This year Alia won the Best Actress award at the 62nd Jio Filmfare Awards, whereas Aamir Khan won the Best Actor award for Dangal. While receiving the award, Alia mentioned in her acceptance speech that it was an honour for her to receive the award from a legendary actress like Sridevi.

@aliaa08 Such a gratifying image . Sheer joy to see you receive an award from Sridevi. She is an outstanding actor /star !!

Notably, Sridevi has worked with Mahesh Bhatt in his 1993 directed film Gumrah opposite Sanjay Dutt. Gumrah was the seventh highest grossing hindi film at the box office in 1993. Also, Sanjay Dutt recently gave his blessings to Alia and Varun before the song release of Tamma Tamma, which is the remake of Dutt's 1990 song from Thanedaar.

Up next, Alia Bhatt will be seen in romantic-comedy film Badrinath Ki Dulhania opposite Vraun Dhawan. Alia will then after star working on Ayan Mukerji's next film Dragon, which also stars Ranbir Kapoor.