"It was an amazing family experience in focus, discipline and hard work," wrote Madhuri Dixit 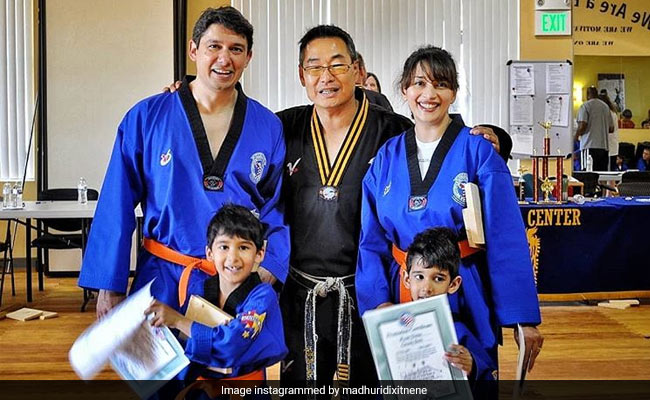 Making the best use of Flashback Friday, Madhuri Dixit shared a throwback picture from her Taekwondo class sessions that she took with her family. In the picture, Madhuri features with her husband Shriram Nene, and her sons Arin and Ryan Nene. The 53-year-old actress, in her post, revealed that the picture was taken during the testing day of the Taekwondo class (going by the picture, seems like the entire family received their orange belts). The caption on Madhuri Dixit's post read: "Testing day for our orange belts. Breaking boards and learning Taekwondo together was an amazing family experience in focus, discipline and hard work." She accompanied the post with the hashtags #FlashbackFriday and #Taekwondo.

Madhuri Dixit has a treasure trove of throwback pictures, which she frequently shares on her Instagram profile. Check out some of the photographs here:

Last year, Madhuri Dixit made several onscreen appearances. She starred in films such as Kalank and Total Dhamaal. In the box office debacle Kalank, she co-starred with Alia Bhatt, Varun Dhawan, Sanjay Dutt, Sonakshi Sinha and Aditya Roy Kapur. In Total Dhamaal, Madhuri featured alongside Anil Kapoor, Ajay Devgn, Arshad Warsi and others. During the lockdown, she released her first single titled Candle.