Maanyata wrote: "Fall in love with a person who enjoys your madness... and not someone who forces you to be normal." 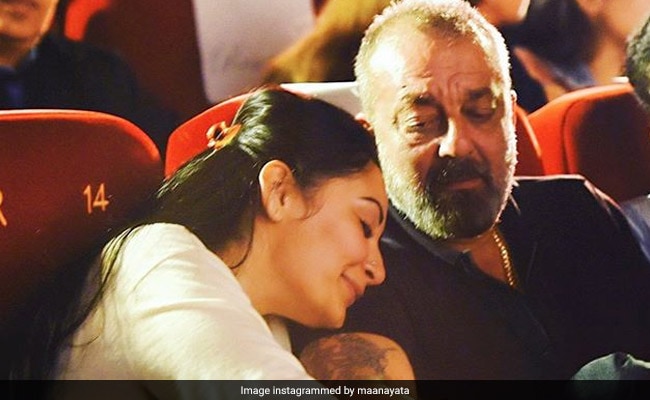 Sanjay Dutt's wife Maanyata Dutt painted Instagram red with a loved-up photo of herself and the Prasthanam actor, which she shared with an adorable caption. Dedicating a note to Sanjay Dutt, Maanyata wrote: "Fall in love with a person who enjoys your madness... and not someone who forces you to be normal." While her caption is sure to win you over, wait till you see the photo. Maanyata and Sanjay Dutt can be seen sharing a quiet moment at what appears to be a theatre. Maanyata's smile in the photo says it all. Meanwhile, Sanjay Dutt's Prasthanam co-star Manisha Koirala turned out to be one of the first ones to drop a comment.

"Absolutely adorable," she wrote. Manisha Koirala and Sanjay Dutt are reuniting after a hiatus of 10 years with Prasthanam. Take a look at Maanyata's photo here:

Fall in love with a person who enjoys your madness... and not someone who forces you to be normal #feellove #besthalf #love #grace #positivity #togetherforever #beautifullife #thankyougod 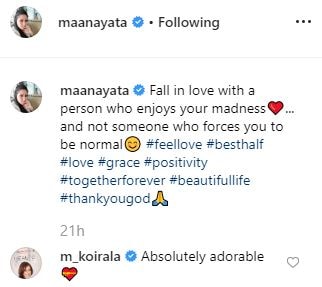 Meanwhile, Maanyata's Instagram posts are all about family, mostly featuring their children Shahraan and Iqra. On Father's Day, Maanyata trolled Sanjay Dutt with a post and Shahraan and Iqra experimented with his hairstyle: "When kids get tired of their fathers bald look for way too long."

On Maanyata's birthday in July, Sanjay Dutt kept his wish simple and full of love: "Can't imagine my life without you! Happy birthday, my love." Sanjay Dutt and Maanyata married in 2008.

Can't imagine my life without you @maanayata! Happy Birthday my love

On the work front, Sanjay Dutt was last seen in Kalank and has films such as Torbaaz, Prasthanam, Panipat, KGF 2 and Sadak 2 in the line-up. Prasthanam is his next release, which hits screens in September.