"When was the last time you did something for the first time," wrote Taapsee Pannu 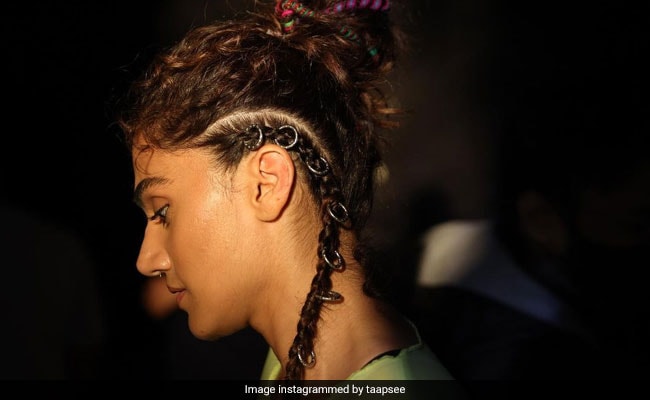 Another day, another update from the sets of Looop Lapeta. On Saturday, Taapsee Pannu shared a BTS picture from the sets of her forthcoming film and what's not to love? The actress, in the close-up shot, can be seen sporting an intense expression. Taapsee has her hair immaculately tied in a braid. Taapsee, who plays the role of a girl named Savi, captioned her post: "When was the last time you did something for the first time." She accompanied the post with the hashtags #BeingSavi and #LooopLapeta. Taapsee's Instafam filled up the comments section of her post with heart emojis. Looop Lapeta is the Hindi adaptation of the 1998 German hit Run Lola Run.

A few days ago, the actress shared a picture from the sets of the film and she wrote in her caption: "When you are in between 2 perspectives, in middle of wired up chaos and what you do in the frame is going to matter... Chin up, feet up and just focus! Coz not everybody gets this privilege. (Also coz you are getting clicked by the lens man doubling up as producer)."

Taapsee Pannu shared the first look from the film on social media a few days ago. Check it out:

Looop Lapeta also stars Tahir Raj Bhasin in and it is being directed by Aakash Bhatia. In the original film, the lead actress was Franka Potente and Moritz Bleibtreu played the role of her boyfriend. Tahir will step into the shoes of Moritz in Looop Lapeta.