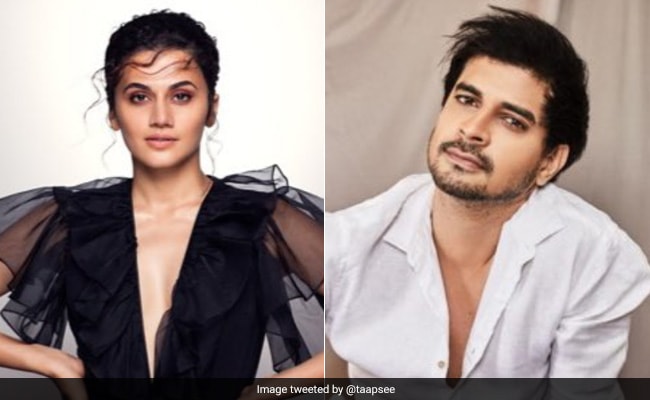 Taapsee and Tahir haven't worked together before. (Image courtesy: taapsee)

Taapsee Pannu and Tahir Raj Bhasin are all set to co-star in the Hindi adaptation of the 1998 German hit Run Lola Run. The film, titled Looop Lapeta, will be directed by Aakash Bhatia, who has also directed TV series Inside Edge. Announcing her new project with Tahir Raj Bhasin, with whom Taapsee has not shared screen space yet, the actress wrote: "I'm greedy for good scripts, here's one more. Sony Pictures India and Ellipsis Entertainment's Looop Lapeta, thriller-comedy with Tahir Raj Bhasin." While Taapsee Pannu will step into the shoes of the film's lead actress Franka Potente, Tahir will play the role of her boyfriend, originally portrayed by Moritz Bleibtreu in Run Lola Run. Looop Lapeta is slated to release on January 29 next year.

Run Lola Run is a crime thriller directed by Tom Tykwer. Released in 1998, the film received critical acclaim for its cinematography, editing and soundtracks. The film revolves around the story of Lola (Franka Potente), who desperately tries to find 100,000 Deutsche marks (German currency) to save her boyfriend Manni's (Moritz Bleibtreu) life. Run Lola Run tells the same story of Lola and Manni in three alternate and parallel timelines. The film received several accolades, including the BAFTA Award for the Best Film Not in the English Language. It was also Germany's entry for the Oscars in the Best Foreign Language category in 1999.

Talking about her new project, Taapsee told Mumbai Mirror that she "can't wait" to start shooting the film. She said: "Savi is a quirky, insane addition to my repertoire. I love how an iconic film like Run Lola Run has been adapted for the Indian milieu without losing its edge. More excitingly, it's been laced with amazingly cheeky straight-faced humour. It's cool in the truest sense of the word and as bold thematically as it is stylistically. I can't wait to get started."