Jisshu Sengupta and Alia Bhatt are gym buddies in this photo. Here, take a look 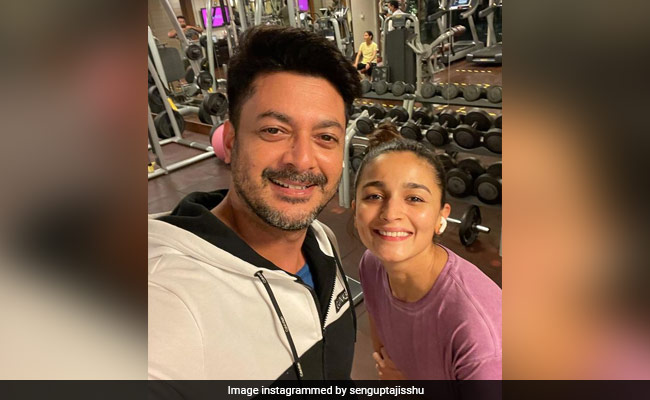 Alia Bhatt is never too busy to hit the gym and she's been doing just that during her stay in Hyderabad. Earlier this week, Alia Bhatt flew off to Hyderabad for the shooting schedule of SS Rajamouli's RRR, glimpses of which she has been sharing on her Instagram stories. Alia is also frequently checking in from the gym - during one of her work out sessions at the Hyderabad hotel's gym, she bumped into a former co-star Jisshu Sengupta. Alia and Jisshu co-starred in the 2020 movie Sadak 2. Jisshu Sengupta roped in Alia for an adorable selfie, which he shared on his Instagram with the biceps emoji.

Jisshu Sengupta's post, featuring Alia Bhatt, has gone viral since then. Jisshu and Alia are gym buddies in this photo. Here, take a look:

Meanwhile, here are pages out of Alia Bhatt's RRR diaries, which she shared on her Instagram stories and have been curated by fan clubs:

RRR is based on the fictional story of two revolutionaries from pre-independence era, set in 1920. While Jr NTR features as revolutionary tribal leader Komaram Bheem, actor Ram Charan has been cast as revolutionary Alluri Sitarama Raju. Alia Bhatt has been roped in to play the role of Sita, Ram Charan's love interest.

After months of lockdown, Baahubali director Rajamouli resumed the shooting schedule of RRR in November last year - Alia joined recently. The film was initially supposed to hit screens in January this year but was postponed because of the pandemic. RRR is all set to hit screens on October 13, 2021.