When adorable Ahil joined dad Aayush Sharma in the gym 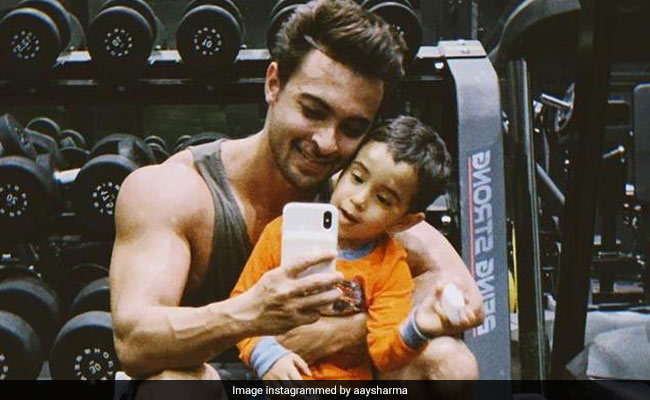 Salman Khan's nephew Ahil adorably joined his dad Aayush Sharma at the gym today and his take-away from his dad's work-out session has an Avengers reference. Aayush Sharma shared a photo of his gym buddy - son Ahil - on Instagram and included a conversation he had with the little on in the caption. "While we were taking this picture Ahil asked: "Papa, can you get me muscles like The Hulk?" Aww, so cute. In the photo, Ahil can be seen posing with Aayush inside the gym. In a video on his Instagram story, Aayush revealed while he was working out, Ahil too had a blast playing with the gym balls. "My new fitness coach," Ayush captioned his Instagram story.

Take a look at Ahil being adorable in the gym here.

While we were taking this picture Ahil asked, "Papa, can you get me muscles like The Hulk?"

Looks like Aayush Sharma can work out "anywhere, anytime" with his favourite gym prop - Ahil: "A little play time with Ahil means my impromptu workout sessions."

Baby Ahil often features in Instagram posts of his parents Aayush and Arpita Khan Sharma (Salman's sister). The Internet particularly loves Ahil's adorable photo with mamu Salman Khan. Earlier this year, netizens went crazy over a click of Ahil sandwiched between Salman and Arpita. "My life in one frame. My brother and my son. Thank you God for the choicest blessing," she captioned the photo.

My life in one frame My brother & My son. Thank you god for the choicest blessing

Ahil is also perhaps the only one who is allowed to play with Salman's signature bracelet: "This is how he spent his Sunday," wrote Arpita for a post. Salman Khan also took Ahil to the sets of Bigg Boss 10 once.

Arpita Khan Sharma and Aayush Sharma married in 2014 and Ahil was born in 2016.