Ahil's expression in the picture is simply precious 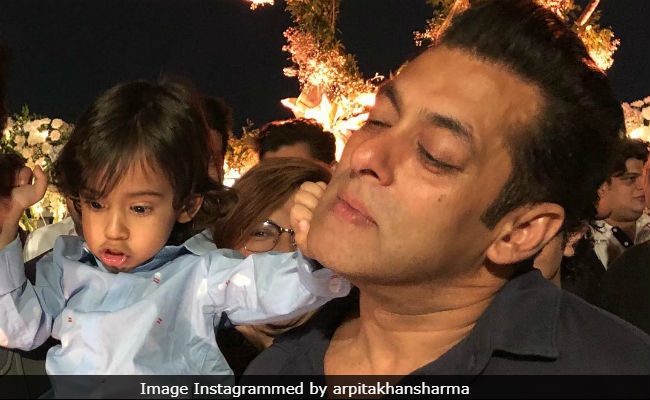 Arpita Khan Sharma's latest Instagram post is making the Internet very happy. Why, you ask? Well, the picture features Arpita's 2-year-old son Ahil along with his mamu  Salman Khan. On Monday, Arpita treated her fans to an adorable candid picture of the duo. However, it will be difficult to say if it is Ahil's cuteness or Salman's priceless expression that stole our hearts. Arpita's post received over 54,000 likes on Instagram. Arpita described the picture in the best way possible and wrote: "Ahil and mamu banter as always ! Candid moments." Though Salman hasn't reacted to Arpita's post as of now but we are excited to see his response.

Last week, Arpita shared an image of Ahil from their Dubai vacation, in which the little munchkin could be seen playing with a dolphin. She wrote: "Breaking the ice between Ahil and Danita the beautiful dolphin."

Arpita's Instagram posts frequently feature Ahil with his Salman 'mamu'. Last month, Arpita shared a video, in which Salman could be seen instructing Ahil (who was smeared with paint), to walk on the canvas. "Ahil's first painting on canvas escapade with mamu," Arpita wrote.

ICYMI, check out the video here:

Here are some of our favourite Ahil-Salman moments, you can thank us later:

I am definitely the luckiest sister in the world to have the most amazing , loving , giving , caring brother ! Thank you for being this larger then life person you are in all ways. Can't thank you enough for all that you have done not only for me but all the souls you touch. Love you Bhai now and forever @beingsalmankhan Happy Rakhi , miss you

Arpita got married to Aayush Sharma in 2014. Aayush recently made his Bollywood debut with the 2018 film LoveYatri, which was produced by Salman Khan.

Salman Khan is currently busy filming Ali Abbas Zafar's Bharat. He also has Dabangg 3 in the pipeline. Salman Khan was last seen in the action-thriller Race 3.