Lisa Haydon's Stunning Vacation Pics Will Give You Chill Vibes 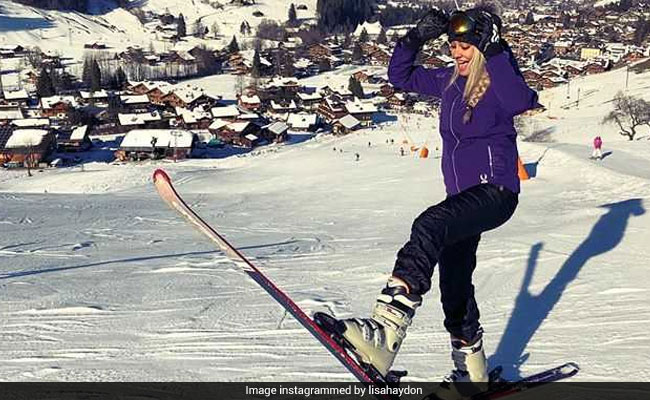 New Delhi: Actress Lisa Haydon welcomed the New Year joyfully and is currently enjoying around the snow clad mountains in the Swiss Alps. Lisa shared some wonderful pictures of herself from the winter land and they definitely made us envious. In one of the pictures posted by Lisa, she can be seen trying skiing while in the other picture Lisa poses perfecting around the Swiss Alps in Gstaad. Lisa captioned the picture as, "Dream Hope Love more than ever! Happy 2018 everyone." Lisa Haydon is married to a businessman Dino Lalvani. The duo dated for a year and the couple welcomed their first child, a baby boy Zack, in May, last year. See the pictures from Lisa's New Year celebrations.

"Come up, Slow down," Instagrammed Lisa.

Come up, Slow down

Dream Hope Love more than ever! Happy 2018 everyone

Did you get some chill vibes?

Lisa Haydon made her acting debut with a supporting role in the 2010 Aisha, co-starring Sonam Kapoor and received critical praise for her performance in Kangana Ranaut's hit film Queen, for which she also received Best Supporting Actress nomination at Filmfare. Lisa Haydon later starred in Housefull 3 and had a brief role in the Karan Johar-directed romantic drama Ae Dil Hai Mushkil(both 2016).

Lisa celebrated her first anniversary with Dino at an undisclosed location but made sure to post some gorgeous beach pictures from her vacation. Lisa also posted some adorable photos featuring herself and baby Zack and all we could say was aww...

Promoted
Listen to the latest songs, only on JioSaavn.com
On World Breastfeeding Day, she shared a picture of herself feeding Zack and highlighted the benefits. "Breastfeeding has been challenging time consuming (literally hours spent every day trying to stimulate milk supply) but it's such a beautiful way to bond and connect with your child plus all the nutritional benefits that your child gets from your milk," she wrote.

I've gotten loads of posts asking about life after having my son... esp to do with weight and fitness. Seeing as it's World Breastfeeding Week- time to give some credit where credit is due. Breastfeeding has played such a big part in getting back into shape after giving birth to my baby. Breastfeeding has been challenging+time consuming (literally hours spent everyday trying to stimulate milk supply) but it's such a beautiful way to bond and connect with your child plus all the nutritional benefits that your child gets from your milk. Look out for my blog post on mycityforkids.com on breastfeeding. Happy #worldbreastfeedingweek

Lisa Haydon appeared as the host and a judge on India's Next Top Model Season 1. She was also seen in the web series The Trip.