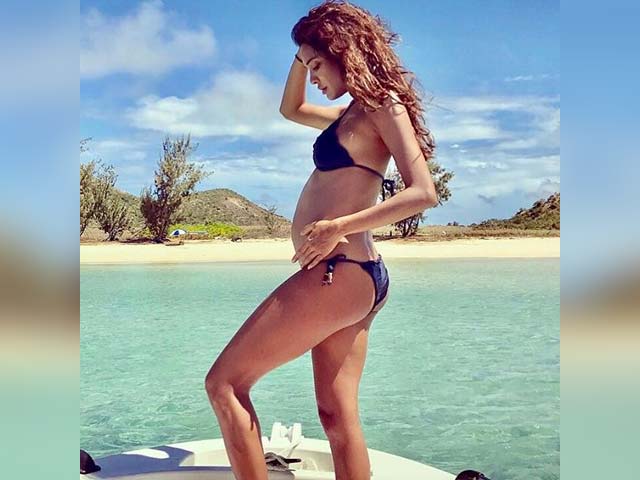 New Delhi: Actress Lisa Haydon has made a pregnancy announcement of sorts with a picture on her Instagram account, in which she poses on the beach in bikini and shows off her baby bump. "Humble beginnings," wrote the 30-yeear-old model-turned-actress. Lisa Haydon married businessman Dino Lalvani in October last year. Her Instagram feed indicates she is currently in Australia, with one picture taken on Bondi beach. Lisa, who is part Australian, is best-known for her performance as the feisty and free-spirited Vijaylakshmi in Kangana Ranaut's 2014 film Queen. Lisa made her film debut in Sonam Kapoor's Aisha (2010) and has appeared in the films The Shaukeens and Housefull 3. She was last seen on the big screen in a small role in Karan Johar's 2016 hit Ae Dil Hai Mushkil.

Last year in September, Lisa Haydon announced her engagement in a similarly oblique manner on Instagram. "Gonna marry him," she captioned a photo of herself and Dino Lalvani, who runs British telecom company Binatone, founded by his father Gulu Lalvani.

Promoted
Listen to the latest songs, only on JioSaavn.com
Lisa and Dino had a beach-side wedding, pictures of which the bride posted on Instagram:

Shortly after the wedding, Lisa indignantly tweeted a clarification of her father-in-law's nationality. "My husband is Indian. My father-in-law, Gulu Lalvani, was born in pre-partition India and was thrown out of what is today called Pakistan. To call someone, who has gone through the struggles of partition, non-Indian is absurd," she wrote, after a report appeared in a publication.

Lisa Haydon recently featured in a photoshoot for Vogue with Hrithik Roshan, pictures from which went viral. Lisa is currently appearing on web series The Trip.