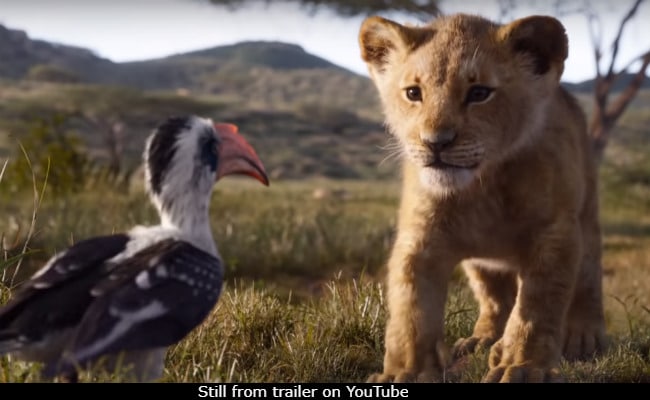 A still from the new Lion King trailer (courtesy YouTube)

It's part of Disney's circle of life that the summer of 2019 will largely be ruled by franchises created in the '90s.

The studio's live-action adaptation of its animated 1992 classic Aladdin will land May 24, followed by Toy Story 4 one month later. But perhaps no movie will reign bigger at the season's box office than Disney's CGI-heavy adaptation of its beloved animated 1994 smash, the Oscar-winning Lion King.

And if judging by the emotional early reaction to the nearly two-minute trailer that landed Wednesday, Jon Favreau's Lion King could well become the biggest of Disney's "live action" remakes.

Everything from the iconic music to the A-list voice cast to wide shots of panoramic Pride Rock was stoking social-media warmth - with only a few touches drawing critical fire.

Here are five immediate takeaways from the trailer:

When the first teaser for this Lion King was released months ago, many social-media commenters sniped that it simply looked like a photorealistic shot-for-shot remake of superior animation.

Now, however, Favreau's film is explicit in visually "quoting" the original - for the silhouetted shot of young Simba growing up trailing Timon and Pumbaa - cementing the direct connection to the brilliant montage of maturation. The nostalgic effect is inspired.

2. The return of James Earl Jones is the film's most resonant callback.

For all the visual connective tissue between the two movies, it would be a pity not to return at least one voice actor from the original. Besides, who could ever fully replace baritone Jones as Mufasa?

So while Donald Glover takes over for Matthew Broderick's vocal performance as adult Simba - thus leading the cast of new talent - it's the return of Jones as king that resonates most deeply in the new teaser.

But, as has become a popular refrain on social media, are you prepared to see Mufasa die again, only this time in photorealistic high-def?

3. Does the new version of the villain measure up?

If Lion King fans have a foremost concern, it is over the look and sound of Mufasa's rival brother - the villainous Scar as now voiced by the Oscar-nominated Chiwetel Ejiofor.

For some fans, it's a tall order to replace the sly, devious purr of another British-born actor, Jeremy Irons, who so memorably delivered droll wordplay and menacing musical bite in his '94 performance.

Concerning more viewers, though, seemed to be how Disney is painting the baddie in this "Hamlet" on the Savannah. In the most brightly lit images, this wan Scar appears to lack his trademark black mane.

Would Disney really dare to alter Scar so drastically?

4. Beyonce brings her own circle of excitement.

But as Lion King enjoys a sense of homecoming a quarter-century later, arguably no voice is more anticipated than Beyonce (credited on-screen as Beyonce Knowles-Carter) as Nala - a performance that should also help sell that new soundtrack, as covers of the iconic music help stir the glow of nostalgia.

Turns out Favreau's time as Jungle Book director was in some ways just a warm-up for his overseeing the CGI wizardry of this Lion King.

Skeptics may snipe that a non-animated Lion King begins to look more like a nature documentary, but the cutting-edge pixelated wizardry here still must service the needs of creating character performance.

This Lion King could gross more than $1.5 billion worldwide. Some of that is poured back into tech innovation, so Disney and its creative partners can continue to push the digital envelope.