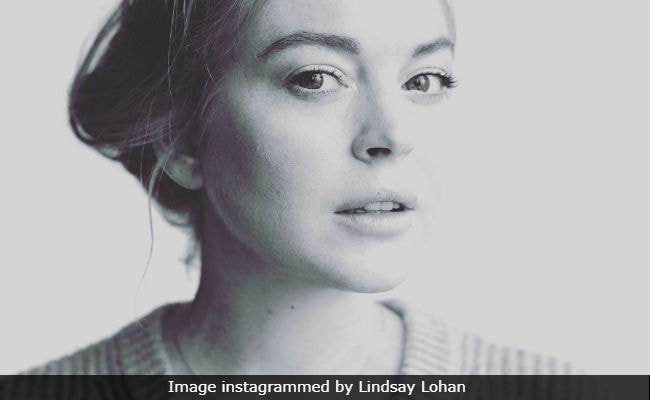 Lindsay Lohan appeared to accuse a homeless couple of trafficking their children in a bizarre video that surfaced on the actress's Instagram account Friday night and ended, apparently, with her getting hit in the face.

The video, which was posted to Instagram Live before being removed, is fueling concerns about the 32-year-old actress, who became tabloid fodder several years ago, at the height of her fame, amid DUI arrests and other legal troubles. Lohan has stayed largely out of the spotlight in recent years, spending much of her time in Dubai - where she has said she plans to design a namesake island - and Greece, where she has lent her name to several beachside night clubs.

According to TMZ, which posted the video Saturday morning, Lohan recorded it in Moscow. In TMZ's version, Lohan appears to address her own Instagram followers, saying, "Hey, everyone, I just want to show you a family that I met, a Syrian refugee family that I'm really worried about." Lohan says she is going to introduce them, and that "they really need help."

The encounter appears to start off cordially. "Tell me your story," Lohan says, "so I can help you." But the choppy video takes a turn as Lohan says, "They're trafficking children." Lohan then begins speaking in English in a strange accent, saying "I won't leave until I take you," and, "Hey, kids!" She then switches to an unintelligible language that some have reported to be Arabic but does not appear to be. "This is not Arab," Lohan says. "You are ruining Arabic culture."

Lohan follows the family, saying "Give me your hand" and "My car is this way," before an altercation ensues, knocking Lohan's camera askew.

"I'm, like, so in shock right now. ... I'm just so scared," a teary Lohan then says while grabbing her cheek.

Lohan has yet to address the incident. But she has previously talked about her ever-evolving (and eyebrow-raising) accent, telling the Daily Mail in 2016 that it was "a mixture of most of the languages I can understand or am trying to learn." She said she is fluent in English and French, and can understand Russian. She told the tabloid she was "learning Turkish, Italian and Arabic."

Earlier in the week, Lohan had attended the Saint Laurent show at Paris Fashion Week in what People magazine called a "rare" appearance.

Lohan is slated to document her expanding business empire in an MTV reality show, called Lohan Beach House, next year. Her acting career has mostly stalled, though she recently appeared in the British series Sick Note.

In June, she detailed her various business ventures - which also include a sponsorship for lawyer.com (the link appears in her Instagram bio) - in an interview with the New York Times.

"There's a business side to my life now, but I'm not in America, so no one knows about it, which is nice for me," she said. "Because I get to actually focus on the result of things."

In January, Lohan did make a rare stateside appearance on The Wendy Williams Show, where she spoke in an American accent and talked about her interest in helping refugees.

"I really threw myself into working with a lot of children and refugees overseas," she told the daytime talk show host. "I feel like there's a lot of love that I have to give and offer to children that don't have anyone, and that have lost their parents and don't have any light or hope in their life. And to be able to bring that to them is my main focus right now."