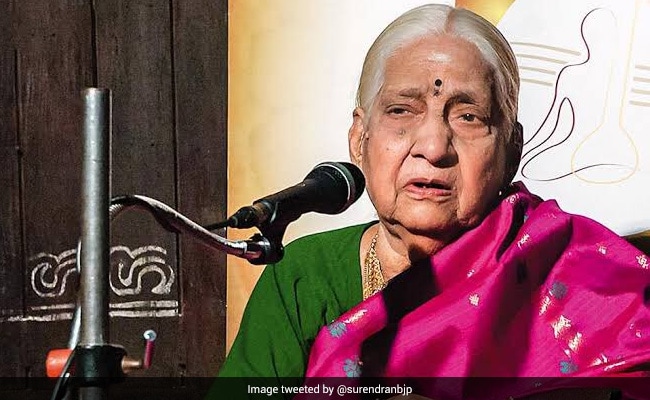 Legendary Carnatic musician and Padmashree awardee, Parassala B Ponnammal, who enthralled classical music lovers for the last eight decades through her incredible concerts, died at her home in Valiyasala here on Tuesday, family sources said.

She was 96 and was suffering from age-related ailments for some time, they said.

A doyen of Carnatic music, Ponnammal was a musician who had broken gender stereotypes in classical music and became the first woman student to enroll in the historic Swathi Thirunal College of Music here during the 1940s.

She had completed the courses-Gana Bhushanam and Gana Praveena- from there with first rank before beginning her career as a music teacher at the Cottonhill Girls''s School here.

Ponnammal also scripted history by becoming the first woman faculty of the Swathi Thirunal College and the first ever woman principal of the famous RLV College of Music and Fine Arts, Tripunithura.

Breaking the centuries-old tradition of male dominance, she also became the first woman to sing at the Navaratri Mandapa here as part of the navaratri celebrations at the Sree Padmanabha Swamy Temple in 2006.

Besides conducting hundreds of concerts during her eight decades-long musical journey, she also moulded a handful of excellent musicians by making them her disciples. Besides the Padma Shri in 2017, Ponnammal was also a recipient of several notable honours including the Lifetime Achievement Award instituted by Chennai Fine Arts, Sangeetha Prabhakara Award, Sangeet Natak Akademi Award, Swathi Sangeetha Puraskaram, Sree Guruvayurappan Chembai Puraskaram and so on.

She is survived by sons D Mahadevan and D Subramanian.

Her husband Devanayakam Iyer and a son and daughter died before.

Condoling her death and hailing her contributions to the word of music, Chief Minister Pinarayi Vijayan said Ponnammal had been a symbol of traditional serenity in Carnatic music.

He also remembered how the legendary woman musician had performed at the Navaratri Mandapa by defying tradition.