Every time I look at this, I keep thinking I must have tapped into some zen zone! Grace from above!" Lara Dutta's thoughts on a throwback video 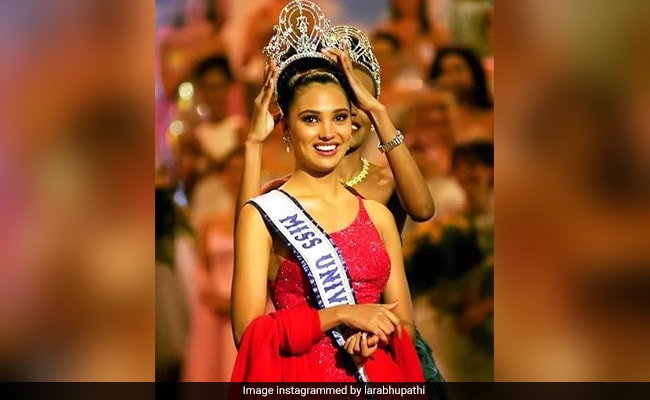 Lara Dutta, who was crowned Miss Universe in 2000, revealed the actual story behind her "calmness" when she was on the Miss Universe stage two decades ago. Reacting to a throwback video from Miss Universe's official Twitter, Lara Dutta wrote: "For all that 'calm' I was a bundle of nerves! Smiling face with open mouth and smiling eyes. Every time I look at this, I keep thinking I must have tapped into some zen zone! Grace from above!" Lara also added the LOL emojis in her tweet. In the video from the Miss Universe pageant in 2000, Lara Dutta can be seen tackling questions on women politicians of India and her dream like a boss and also explaining the concept of Bharatnatyam, confidently telling the questioner that she cannot show even a few steps of the dance form as she's in a gown.

As the camera shifts to Lara Dutta waving at the audience, one of the co-hosts can be seen saying on camera: "She's absolutely breathtaking... and she's so calm. She just exudes calmness" while her colleague adds: "Grace under pressure, I think it's called. I think she has it."

For all that 'calm' I was a bundle of nerves!!! Every time I look at this, I keep thinking I must have tapped into some zen zone!! . Grace from above! https://t.co/jxp3SmIS3W

This year of May 12, Lara Dutta celebrated twenty years of her Miss Universe win with a post, writing: "20 years to the day! May 12, 2000, Nicosia, Cyprus. What a wonderful gift to receive from the universe! One I'm eternally grateful for." The Miss Universe pageant took place in the island country of Cyprus in 2000.

20 years to the day!! 12 th May 2000, Nicosia, Cyprus. What a wonderful gift to receive from the universe! One I'm eternally grateful for . @missindiaorg @missdivaorg @timesofindia @missuniverse #MilleniumsMissUniverse

2000 began with the Miss India pageant in January, in which Lara Dutta's fellow winners were Priyanka Chopra and Dia Mirza. While Lara was crowned Miss Universe in May, Priyanka fetched the Miss World title for India in November and Dia Mirza won the Miss Asia Pacific title. Lara Dutta was the second Indian contestant to win the pageant after Sushmita Sen in 1994.

Just three years after her Miss Universe win, Lara Dutta she stepped into Bollywood with 2003 film Andaaz. She is best known for starring in films such as Bhagam Bhag, Kaal, Partner, Chalo Dilli and the Don series. She was last seen in Welcome To New York. Lara got married to former tennis player Mahesh Bhupathi in 2011 and they are parents to a daughter named Saira.