Golden Globes 2019: Oh, the men tried to compete. And they made a strong showing. Gaga won by a hair. A single blue hair. 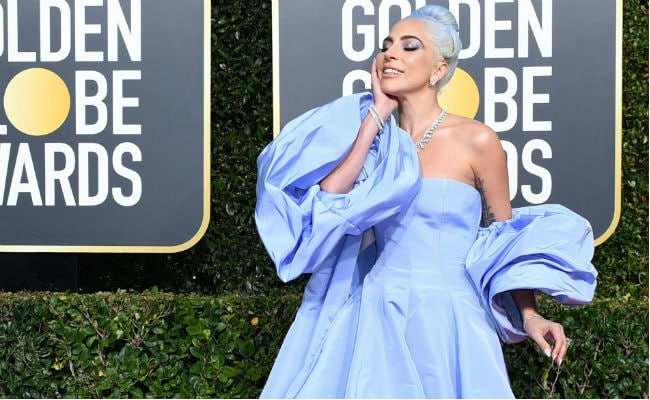 As a fashion extravaganza, the 76th Golden Globe Awards began and ended with Lady Gaga in a billowing Valentino Haute Couture gown in a shade of pale blue with a hint of lilac. The dress required its own team of wranglers to manage the extravagant train, and her necklace - the massive string of Tiffany diamonds dubbed the Aurora - came with its own security guards. Her hair had been molded into something akin to a Henry Moore sculpture and dyed to match her dress - providing vindication for all those ladies of a certain generation who still demand a blue rinse at the beauty shop. When Gaga stepped up to the E! microphone for her red-carpet interview about filming the remake of A Star Is Born, for which she was nominated for her role as Ally, she waxed on about having studied method acting as a child, but she said it was the making of this movie that taught her to "go to the nectar of your being." 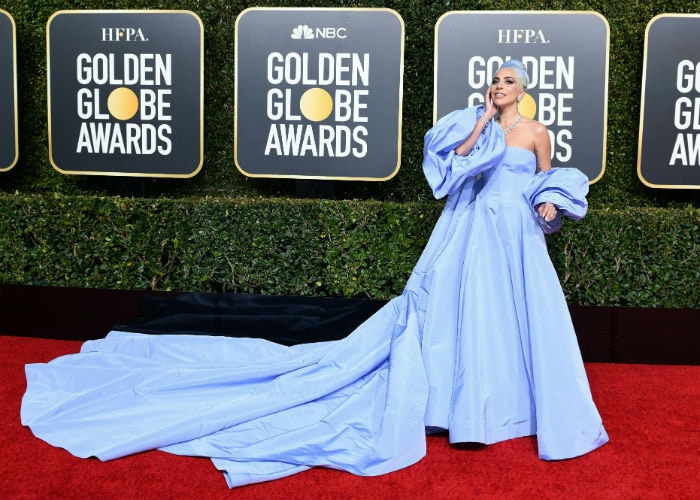 No one else stood a chance - especially after eagle-eyed fans on social media noticed Gaga's dress resembled one worn by Judy Garland in the 1954 version of the film. Gaga was a fashion plate, a showstopper and not just an actor but a thespian, doggonit, all rolled up in a thousand yards of silk taffeta.

Oh, the men tried to compete. And they made a strong showing. Gaga won by a hair. A single blue hair.

Not only is it time to ask the men, "Who are you wearing?" But at long last, the answer is worth knowing.

Billy Porter, nominated for his work in FX's Pose, arrived on the red carpet in a dove-gray cape that was embroidered and bedazzled with flowers. He flung that cape open to reveal a tailored suit and shirt, which were equally abundant with sparkling flora. It was ostentatious and indulgent; it was a smorgasbord of eccentric delights. He was fabulous, dammit! 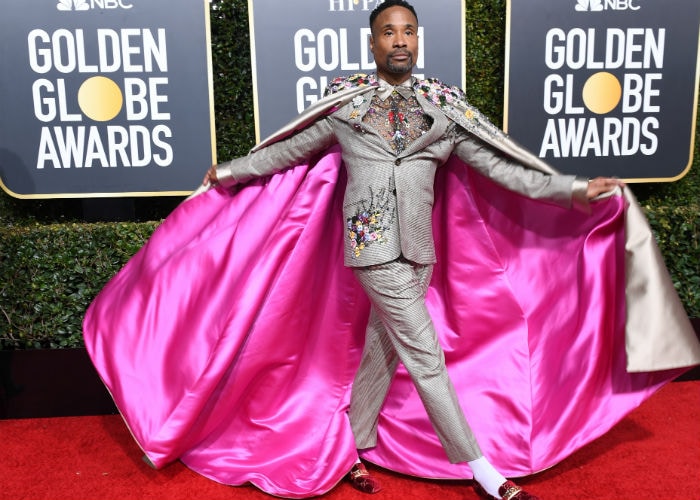 While the other men of Hollywood were not quite as foot-stompingly adamant about reveling in their glory, many of them loosed their imagination and their adventurousness. Idris Elba was a vision - well, Elba is always a vision, and that's a fact. But no matter - he was especially striking in a pine-green jacquard, shawl-collared tuxedo that he said had been made for him by British designer Ozwald Boateng, who is known for bringing a streak of creative subversiveness to the tradition-bound tailoring of Savile Row. Darren Criss, who was nominated for his work in The Assassination of Gianni Versace: American Crime Story, was wearing a dinner jacket emblazoned with cherry blossoms from Dior Homme. Director Spike Lee, nominated for his film BlacKkKlansman, wore purple; Chadwick Boseman was in a crystal-studded white suit; Timothee Chalamet wore a jet-black beaded harness from Louis Vuitton's Virgil Abloh. 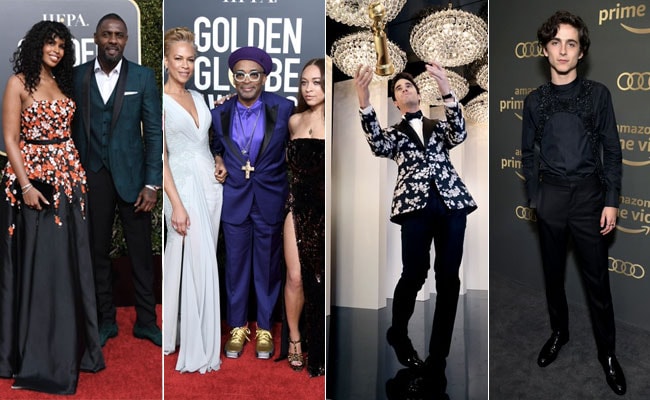 The men - and the women, too - seemed to make their style choices based on what delighted them. They chose freely, or at least as freely as actors can when many of them are paid ambassadors for a brand and are contractually obligated to wear something from the label that is writing the big check whenever they attend certain major press events.

There was politics, to be sure. There were (hash) TimesUpx2 bracelets and ribbons, and references to diversity and declarations about the importance of free expression. And some folks, such as Lena Waithe, cloaked themselves in their politics, wearing black in a continued campaign to raise awareness of sexual assault and harassment across industries. 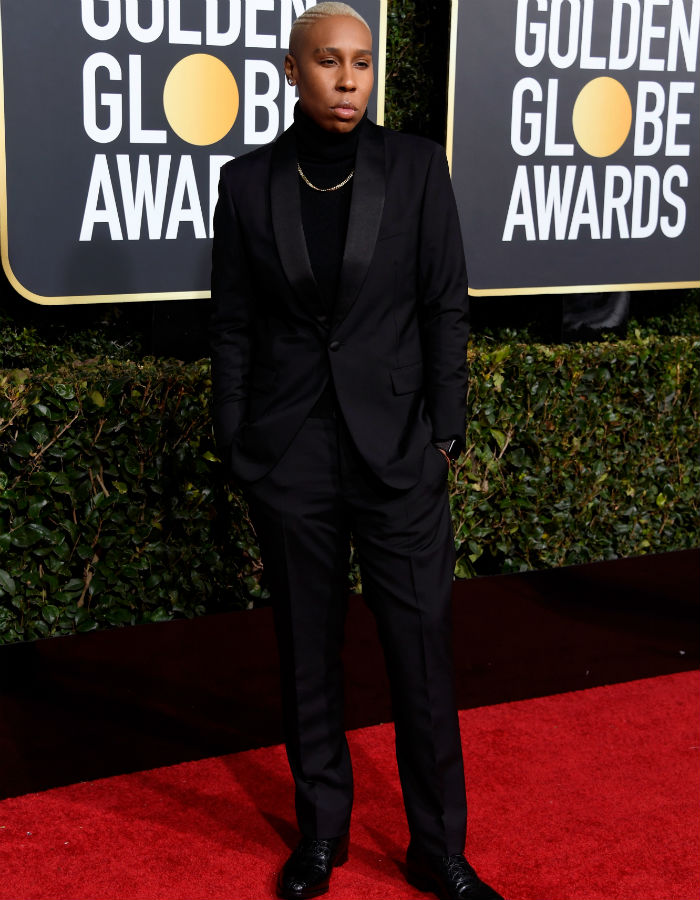 There was plenty of white: Julianne Moore in sculptural Givenchy, co-host Sandra Oh in Atelier Versace, and Jamie Lee Curtis, whose platinum hair matched her gown. The color harks back to the women's suffrage movement and has been embraced as a form of resistance to the silencing of women's voices. But white also looks especially terrific on a red carpet and against bronzed skin. And there's no arguing that Justin Hartley of This Is Us looked dashing in his white Brunello Cucinelli dinner jacket. 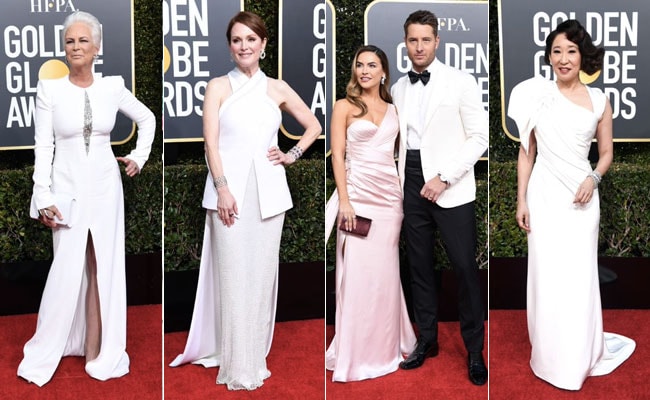 White was a fave at the Golden Globes (courtesy AFP)

There was a last gasp or two from Raf Simons' version of Calvin Klein. The Belgian designer recently parted ways with the company - creative differences, poor sales - but Hollywood still loves him. Amy Adams and Lupita Nyong'o both wore Calvin Klein By Appointment. Adams was in a spare, teal blue, off-the-shoulder sheath. Nyong'o was in a glittering, cobalt-blue, chain-fringed, flapper-style gown. If only stars would buy the darn clothes! 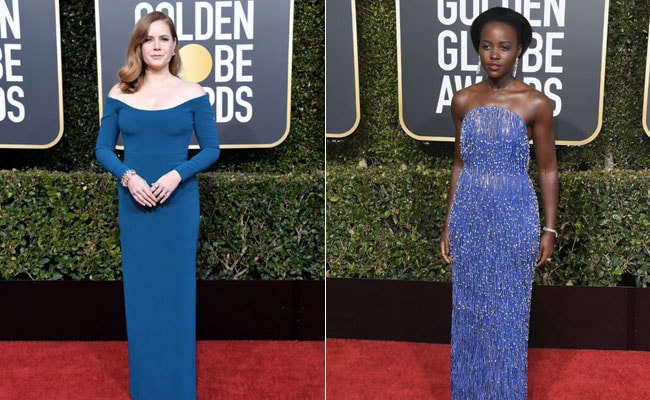 In many ways, the Globes are the fashion warm-up for the Oscars, when most every actress shows up in couture and the men are often in bespoke tuxedos. We can expect more Celine and Louis Vuitton and Valentino. More white. More velvet. But the bigger lesson of the Globes is that increasingly the men on the red carpet are just as interesting as the women - if not more so. The men are not suddenly releasing some long-caged inner peacock. Their flamboyant side has been out and strutting for quite some time. It's that the women's clothes overall just aren't quite as exciting anymore. Lady Gaga was a one-off. The balance of fashion is shifting to the fellas.