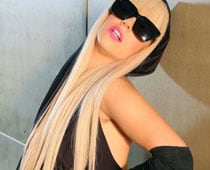 The pop icon, who was here for a four-day trip, left her fans mesmerised with her piano skills, her fusion performance, her confidence and her warm "Namaste India".

All of 25, the Poker Face superstar landed here Thursday night and addressed a press conference and met some of her fans Friday afternoon.

She shot for a chat show with Indian cinestar Shah Rukh Khan and rehearsed long and hard for what was her maiden stage show in India Sunday night.

The singer is lovingly called 'Mother Monster' and she refers to her fans as 'monsters'.

The singer had planned a special treat, and fans were treated to just that--Gaga played the piano herself, and even sang to the strains of a sitar to offer her desi monsters some Indian element.

Known for her bizarre sense of dressing, she chose to go mellow with a creation by designer Tarun Tahiliani for her performance here. She wore a white, knee-length dress and flaunted her open, blonde locks.

She ended her performance with a warm and cheerful "Namaste India".

Around 1,000 guests, including high-profile celebrities from the film, fashion, F1, sports and business worlds, gathered to witness Gaga perform live at the F1 finale after-party here. And so what if ticket were priced at a whopping Rs.40,000!

She bonded well, and met some guests personally too.

But she went a step ahead to do something special for Shah Rukh, who wanted to work with her on a song for his film RA.One.Gaga gave away her personal shades to Shah Rukh for his 11-year-old daughter Suhana.

Of his experience of chatting with Gaga, Shah Rukh told reporters: "It (the interaction) was very nice. She (Gaga) was very sweet. I sat with her for a couple of hours and exchanged a lot of good things about life. She is very deep, very sweet."

The singer has taken home a unique dress by designer Nida Mahmood. The outfit, a short dress, is made with 1,000 LED lights.

Promoted
Listen to the latest songs, only on JioSaavn.com
Describing it, Mahmood told IANS: "The dress which I made for her was part of my WIFW SS-12 collection titled The Great Indian Bohemian Tamasha. The dress is little above the knees and is embellished with over 1,000 LED lights.

"The digital print has been carefully designed incorporating the essence of Indian street theatre. The colours are very Indian - a mix of orange, red, green and blue. I call it 'Jadugaar dress for magical Gaga.'"