Kota Factory 2 Review: The show examines young minds as they navigate hope and expectation in a manner that is gentle and grounded. The young cast is as terrific as it was the first time around. 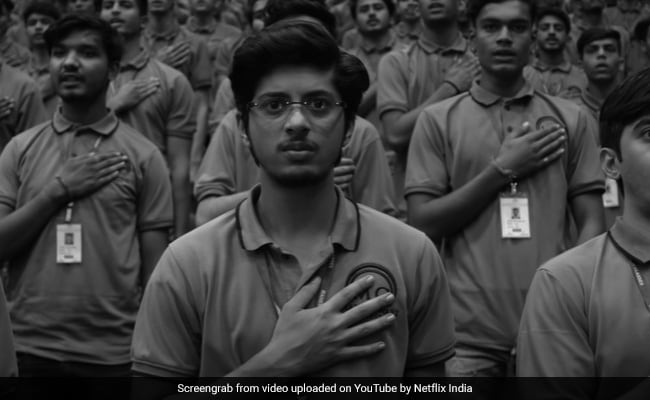 Season 2 is here and all is in order. The nuts and bolts that keep Netflix's Kota Factory ticking are still pretty well-oiled. The show's naturalistic, monochromatic heart continues to be in fine fettle as it captures and responds to the daily struggles of IIT aspirants from across India who converge on the Rajasthan town every year to prepare themselves for the Joint Entrance Examination.

The principal characters have to confront all manner of spanners that are thrown in the works as much by external factors - coaching institute rules, uneven quality of teachers, degrees of difficulty posed by various subjects, the onerous task of fitting in - as by purely internal ones, the most notable among which is the growing sense of inadequacy and unease that creeps up on the candidates as D-Day draws close and the fear of failure grips them.

Kota Factory Season 2, created by Arunabh Kumar, Saurabh Khanna and Raghav Subbu (who also directs the five episodes), is once again like a longish movie that runs three hours and a bit and transports the audience bang into the middle of a wobbly world that we read about a great deal but actually know very little about.

The show examines young minds as they navigate hope and expectation - their own and those of others - in a manner that is gentle and grounded. Kota Factory Season 2, like the inaugural season, is an easy watch. The young cast is as terrific as it was the first time around. Every key actor does her/his bit to show's believable tone and tenor.

The various components - the drama, the emotions, youthful romance and the workings of Kota's high-pressure coaching centres - coalesce neatly thanks to the sharp writing that never strays from methods rooted in the real world even as it seeks to create flashpoints where matters come to a head and trigger alarm as much as they encourage introspection.

Vaibhav Pandey (Mayur More) has made the shift to Maheshwari Classes but easing into the town's premier coaching centre is anything but easy. On the other hand, his favourite Physics teacher Jeetu Bhaiya (Jitendra Kumar) has severed his links with Prodigy Classes and embarked on a project to create his own institute. The two moves entail bitter battles that constitute the spine of Kota Factory Season 2.Jeetu Bhaiya's departure from Prodigy sparks unrest among a few of the students but their excitement knows no bounds when they learn that the tutor who they swear by is set to branch out on his own and teach his old students for free when his institute is up and running. It isn't only what Jeetu Bhaiya does in the classroom that matters, his amiable pep talks work wonders too, especially for somebody like Balmukund Meena (Ranjan Raj), whose problems go beyond the academic and straddle guilt and repentance associated with carnal thoughts.

Ditto for Vaibhav. His now-on, now-off romance with Vartika Ratawal (Revathi Pillai) helps the Itarsi boy take his mind off the pressure that he feels as a consequence of the slow start he makes at Maheshwari. Their friends, Uday Gupta (Alam Khan), Meenal Parekh (Urvi Singh), Balmukund and Shivangi Ranawat (Ahsaas Channa), who steps in when Balmukund needs an agony aunt, serve as sounding boards not only for Vaibhav and Vartika but also for each other when the going threatens to get tough.

The group of six has gender parity, but misogyny is otherwise deeply entrenched in Vaibhav's new coaching institute. Maheshwari Sir (Sameer Saxena), as he addresses an orientation session in a packed auditorium for students who have enrolled a year late - in the hall are Vaibhav and his new "Meena", Sushrut Patel (Vaibhav Thakkar) - he makes no bones about the fact that his sights are only on the boys who have walked in through the portals of his institute. The photographs of the toppers on the banner behind him suggest as much.

"The world is swarming with unsuccessful men with talent," Maheshwari says. "There are only successful men... The unsuccessful ones are not men," he adds without so as much as a twinge of realisation that he might be treading on problematic ground. In fact, even before he makes this shockingly sweeping statement, he reveals his unalloyed prejudice. How you fare here in Maheshwari Classes will determine what kind of house, car and "wife" will come your way in the future.

Kota Factory Season 2, which opens with a brief prelude in colour and then turns black and white before the opening credits of the first episode, addresses the gender imbalance at the heart of the IIT admission system. Jeetu Bhaiya is mindful of the lopsided boys-girls ratio in Kota's coaching centres and decides to hire a female Chemistry teacher for his institute with the aim of enhancing the confidence of his girl students. But does one swallow a summer make?

It obviously doesn't. That apart, Jeetu Bhaiya's dream project faces inevitable teething troubles. He does not, however, pass on the stress that he is under to his students. He is a mentor to those that may not be born toppers and are unprepared for unpleasant jolts. Meenal, Vartika, Uday and Balmukund land up at his home to enquire why he isn't teaching Physics at Prodigy anymore.

He reveals his future plans and proceeds to give them an alternative view of the task they have on hand. The 'IIT preparation' is like a concave mirror, he says. No matter how close you get to it you can't enter it until you cross the focal point of the mirror, he explains. The quartet leaves a bit chastened and hugely enthused. The show brings out the glaring contrast between the ruthlessly performance-oriented and profit-centric approach of the coaching institutes and the infinitely more humane methodology adopted by Jeetu Bhaiya - he does not merely teach, he makes us develop a feel for the subject, one of his students says - to drive home the point that all isn't lost in Kota, because the rough and the smooth co-exist here.

In Season 2, Kota Factory extends its non-judgmental, observational portrait of a coaching hub where many are in constant danger of developing cold feet and falling by the wayside. The doubts and the misgivings are detailed with empathy and granular precision as they ravage the minds of the young people who put all at stake to crack the IIT conundrum.

Watch Kota Factory Season 2 in one go. All you need to get through it is 12.5 per cent of a day.