Koffee With Karan 6: Who Is Abhishek Bachchan More Afraid Of - Wife Or Mom? Sister Shweta Knows 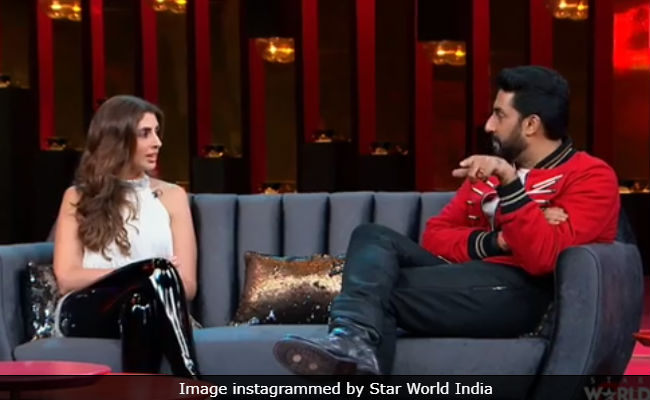 Karan Johar's guests for the upcoming week of Koffee With Karan 6 are the Bachchan siblings Abhishek and Shweta. Going by a 30-second promo shared by Star World India on Instagram, Abhishek Bachchan and Shweta Bachchan Nanda are riots on the Koffee couch. For the uninitiated, Karan Johar counts Shweta and Abhishek Bachchan among his childhood friends. This may be one of the reasons why Abhishek and Shweta are at their outspoken best on the talk show. In the promo, Shweta spills the beans on Abhishek and they have different answers to Karan Johar's question, which adds to the viewers' entertainment. Here's the conversation:

Karan Johar: "Who are you (Abhishek Bachchan) more afraid of - your mom or your wife?"
Abhishek: My mom.
Shweta: His wife.
Abhishek: It's my rapid fire. You keep quiet.

Abhishek, it appears, doesn't like being bested by his elder sibling, who also said on the show she "tolerates his sense of humour." Abhishek's reaction is priceless.

Watch the promo of Koffee With Karan 6 here:

The Bachchan siblings bring their A-Game to the Kouch. It's #KoffeeWithBachchans this week on #KoffeeWithKaran.

On the work front, Abhishek Bachchan, who was last seen in Manmarziyaan, will soon begin filming Amazon web-series Breathe 2 with Amit Sadh. He has also signed up for Anurag Kashyap's Gulab Jamun, co-starring Aishwarya Rai Bachchan. Shweta Bachchan is the author of Paradise Towers, which hit the bookshelves in October 2018.