Koffee With Karan 6: Katrina Kaif And Varun Dhawan Are All Set To Have 'Great Conversations' On Karan Johar's Show 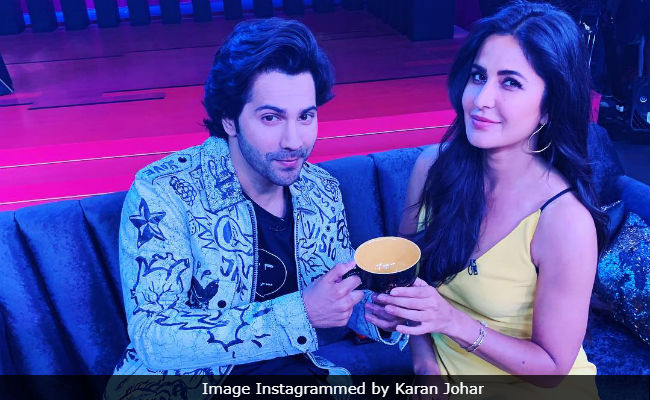 Varun Dhawan and Katrina Kaif on the sets of Koffee With Karan 6. (Image courtesy: karanjohar )

Just when we thought that the guest line-up of this season's Koffee With Karan couldn't get more interesting, Karan Johar shared a picture of his next guests on the show, who happen to be none other than Katrina Kaif and Varun Dhawan. Yes! you read that right. It will be interesting to see Katrina and Varun share the couch and who knows, the duo might as well talk about Varun's "I Hate Katrina Kaif Club." For those who don't know, several years ago, Varun Dhawan and Arjun Kapoor formed an "I Hate Katrina Kaif Club," the existence of which was ousted during an episode of Koffee With Karan 5. Katrina, (who made her Koffee With Karan debut last year), revealed that Varun started the club after Salman Khan gave him a hard time for checking her out. Excited much?

On Thursday, Karan Johar shared pictures of Katrina Kaif and Varun Dhawan, from the sets of Koffee With Karan 6, on his Instagram account and wrote: "So much fun in the koffee house today! A riot of a combination with some great conversation!"

So much fun in the koffee house today!!! A riot of a combination with some great conversation! #koffeewithkaran @varundvn @katrinakaif @starworldindia @hotstar

KJo shared another picture from the sets of the show, in which he could be seen posing with Katrina and Varun and wrote:"The koffee posers."

Last week, KJo shared the promo of the first episode of Koffee With Karan 6, featuring Alia Bhatt and Deepika Padukone, in which the duo could be seen discussing Ranbir Kapoor, wedding plans and more. ICYMI, here's the trailer. You can thank us later.

Girl power in the KOFFEE house!!! Fun and games are about to begin! #koffeewithkaran from the 21st of October on @starworldindia at 9pm! @hotstar @deepikapadukone @aliaabhatt

The sixth season of Koffee With Karan went on floors in September and it will go on air on October 21. Excited much?