"When I was born my name was Rahul. I was Rahul Kumar Johar for 12 days," Karan Johar said on Koffee With Karan 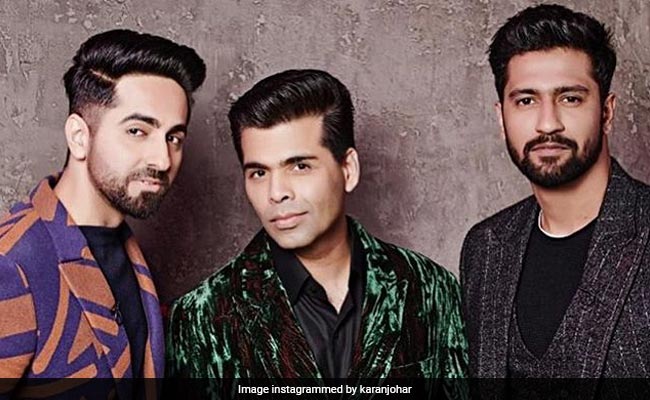 Ayushman, Vicky and Karan Johar from the sets of Koffee With Karan (courtesy karanjohar)

Sunday's episode of Koffee With Karan was full of trivia - not just about guests Ayushmann Khurrana and Vicky Kaushal but also about show host Karan Johar. Did you know KJo's mom Hiroo Johar changed his name to 'Karan' after she had a dream? Neither did we but Ayushmann and Vicky helped us learn so. When Ayushmann said he was initially named as 'Nishant', Karan also spilled the beans and said he was originally assigned the name 'Rahul' right after his birth but after Hiroo Johar had a dream that her son's name should be 'Karan', he was renamed as Karan Johar. "When I was born my name was Rahul. I was Rahul Kumar Johar for 12 days. On my janam patri, it still says Rahul Kumar Johar," he said on the show and added that now, his full name actually is Karan Kumar Johar. That's when Vicky Kaushal quickly assigned him a set of new initials. "KKJo", said Vicky while everybody burst out laughing.

Apart from the big reveal, Sunday's episode was an absolute laugh riot, courtesy of Ayushmann Khurrana and Vicky Kaushal, both of who made their Koffee debuts and mostly avoided being "politically correct" on the show. The show began with Ayushmann saying he's not watched Koffee With Karan since 2012 because he wasn't invited while Vicky said that it's his favourite show.

Karan Johar made the episode three-fold interesting by introducing the Acting Game along with the Gaming Round and the Rapid Fire round. During the Acting Game, Ayushmann was more than happy to blurt out Sunny Deol's signature lines while Vicky was his perfect partner in crime. Also, remember when Katrina Kaif said she would look good with Vicky Kaushal on screen? The Raazi actor appeared to "faint" when he was told about Katrina's statement.

Vicky Kaushal also revealed that his star-struck moment was when Shah Rukh Khan called him up to appreciate his performance in Lust Stories. Vicky, who said he was chilling in his pyjamas, couldn't believe his ears. In more revelations, Ayushmann said he was slapped by his grandmother as a child when he said he wanted to be an actor. When asked about the genre of films that Ayushmann has featured in (Vicky Donor, Badhaai Ho, Shubh Mangal Saavdhan), he said: "I am the new sex-pert."

During the Rapid Fire Round, Ayushmann said he wants to go on a holiday with Katrina, Deepika Padukone and Anushka Sharma when asked to name three stars and added that he has a man-crush on Ranbir Kapoor. Vicky Kaushal said that th new rumour that he wants to start is that "I am the new Dharma kid." Vicky also added that at the beginning of his career, he "could never say that I wanted to be the hero" because of his unconventional looks.

While both Ayushmann and Vicky were looking forward to the koffee hamper, it turned out to be a tie! In the Gaming Round, it was Bhumi Pednekar, who said: "Hey Karan, it's me" for Ayushmann while Vicky Kaushal was helped by Taapsee Pannu.

The episode ended with a glimpse of the next one, in which the Baahubali trio - Prabhas, Rana Daggubati and SS Rajamouli - will be on the koffee couch. Watch this space for more updates on Koffee With Karan.