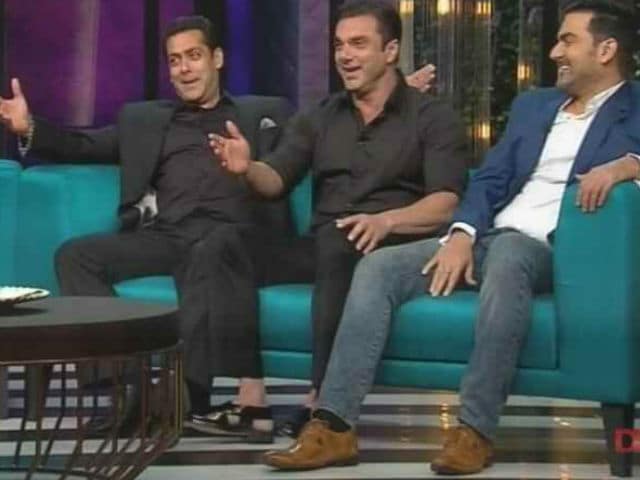 Koffee With Karan 5: Salman and Sohail mimic SRK on the show

New Delhi: Filmmaker Karan Johar's celebrated chat show Koffee With Karan aired the sixth episode of season five on December 11 and 'exploding with ecstasy,' Karan Johar invited Salman Khan and his brother Arbaaz and Sohail on the show. Salman took Karan's chair and KJo graciously let his guest have their own way. Karan said that since it's the 100th episode something new should happen and invited Salman to ask questions. But Salman had none. Karan started the show with a recap to Salman's last visit by asking him is he still a virgin. Salman replied: "Nothing has changed, neither have you."

They discussed everything - from friendship, family, Salman's girlfriends to his feud with Shah Rukh Khan. In all that chat we gathered many priceless reactions emoted by the 'fabulous three,' as Karan would call them. Here's a small sample:

Who was Kalia (in Sholay)?, asked Karan Johar

Salman Khan was very protective of 'his friend' Katrina Kaif on the show. But he still mimicked the actress.

Karan asked the trio to recite a famous dialogue by the famous personality he'd mention.

Salman said that even after many years nothing's changed in his equation with his brothers "We used to share our underwears then and even today..."

And Sohail's reaction shouldn't be missed:

Salman Khan shared an interesting anecdote around a thief, a walkman and the brothers. Salman's description of what he saw that night still gives us laughter hiccups:

Promoted
Listen to the latest songs, only on JioSaavn.com
Karan Johar opened the fifth season of Koffee With Karan with an episode featuring Shah Rukh Khan and Alia Bhatt. He followed up with Akshay Kumar and Twinkle Khanna, Ranveer Singh and Ranbir Kapoor, and last week's Aditya Roy Kapur and Parineeti Chopra. Shahid Kapoor and his wife Mira Rajput's episode is also in queue.

Meanwhile, Aamir Khan will appear in next week's episode with his Dangal daughters Fatima Sana Shaikh and Sanya Malhotra. This is the only season of the Karan's famous chat show which has featured all the Khan trinity.