Koffee With Karan 5: Salman Khan And Bros Put On A Dabangg Show 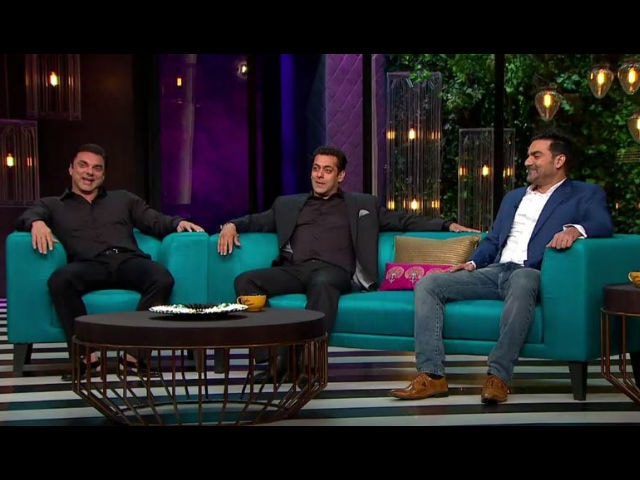 New Delhi: Koffee With Karan 5 is officially 100 not out, presided over by Salman Khan and his brothers Arbaaz and Sohail. Last night's show was, unsurprisingly, a very Salman episode. When the 50-year-old actor appeared on Karan Johar's chat show for the first time on Season 4, he made a series of revelations that included declaring himself a virgin. On his second appearance, he insisted this status hadn't changed - taken with a generous pinch of salt by everyone. Not all of Salman's life was an open book: subjects off-limits included, for instance, reported girlfriend Iulia Vantur. But there was much else for Salman fans to be excited about. Here are three moments.

Salman, soon to be 51, wouldn't discuss Iulia but was quite happy to copy a dance move made famous by actress Katrina Kaif, also reputed to have once dated the star. Katrina's dance routine has been brought up on several episodes of Koffee With Karan this season and possibly nobody butchered the moves the way Salman, whose own dancefloor skills are moot, did. Do you think he did a good job?

Promoted
Listen to the latest songs, only on JioSaavn.com
Salman Khan has already been preceded by Shah Rukh Khan on Koffee With Karan 5, which opened with SRK and his Dear Zindagi co-star Alia Bhatt. Aamir Khan will be next Sunday's guest, with his Dangal daughters Sanya Malhotra and Fatima Sana Sheikh. This will, therefore, be the first season of Koffee With Karan to feature all three Khans in its line-up.

An episode with actor Shahid Kapoor and his wife Mira Rajput has also been shot.