Kim Kardashian's Excitement Over 'So Skinny' And 'Anorexic' Comments Gets Backlash

The reality star has long been open about her weight, but some say her comments are harmful to those struggling with eating disorders. 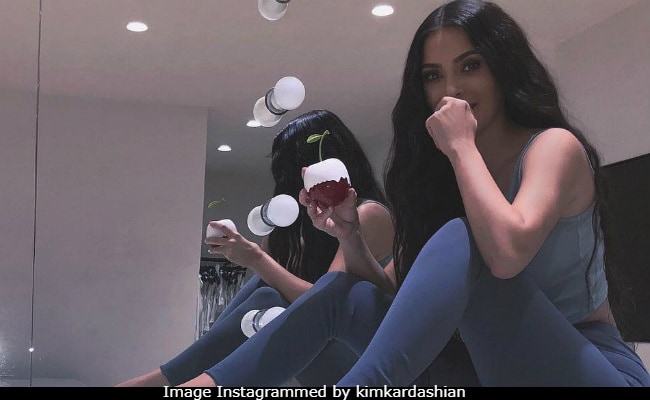 Kim Kardashian West is facing backlash from fans and female celebrities alike after she expressed joy at being called "so skinny" and "anorexic" in a conversation with her sisters Kendall Jenner and Khloe Kardashian.

In an Instagram story that was shared by a Twitter fan account, Jenner tells her sister that she's "really concerned" and doesn't think Kim's eating. "Like, you look so skinny," the model tells Kim, who squeals: "Oh my God, thank you!" The exchange continues with Khloe telling Kim that she's "never seen a human being look as good" and that she looks like "a walking Facetune doll," referring to the popular photo-editing app.

Kardashian's multimillion-dollar brand relies on her willingness to share just about everything, but such candor around her weight often falls in line with images and language that experts say can be harmful for people struggling with eating disorders. Kardashian has revealed her weight on many occasions, even sharing photos of numbers on a scale with captions such as "12lbs to go to reach 2010 Kim!" She has documented various diets and the use of weight-loss supplements, some of which she has been paid to endorse.

As the recent discussion made the rounds on social media, fellow celebrities, including actress Emmy Rossum and Brooklyn Nine-Nine star Stephanie Beatriz, slammed Kardashian and her sisters for their comments.

"Kim Kardashian saying what she weighs and her sisters complimenting her being so skinny is like eating my brain (right now)," Beatriz wrote in Instagram stories captured by ET. Beatriz added that she once weighed the same as Kardashian - while "in the middle of a terrible relationship and intense eating disorder" - and noted that she had "been texting friends for support" after seeing Kardashian's videos. Rossum, who echoed Beatriz's sentiments in Instagram posts of her own, later tweeted about "the danger of praising - even in jest - anorexia."

The Good Place star Jameela Jamil - who previously called Kardashian out for promoting an appetite-suppressant lollipop - shared an Instagram post asserting that the weights of prominent women including Florence Nightingale and Rosa Parks have never been a topic of discussion "because it doesn't matter."

Incidentally, the weight-loss discussion isn't the only exchange that has landed Kardashian in hot water this week. She has also faced criticism for a curt diss directed at Tyson Beckford. After the actor-model wrote, in an Instagram comment, that he didn't "care for" Kardashian's figure (which he suggested had been augmented by plastic surgery), the reality star fired back: "Sis we all know why you don't care for it."

Kardashian appeared to be referencing Beckford's sexuality, and some have called her comment homophobic. For his part, Beckford has been criticized for body-shaming Kardashian.

(Except for the headline, this story has not been edited by NDTV staff and is published from a syndicated feed.)
Comments
Kim KardashianBacklash