"That was my biggest fear because we are in an industry where we feel insecure almost all the time," said actress Karishma Tanna 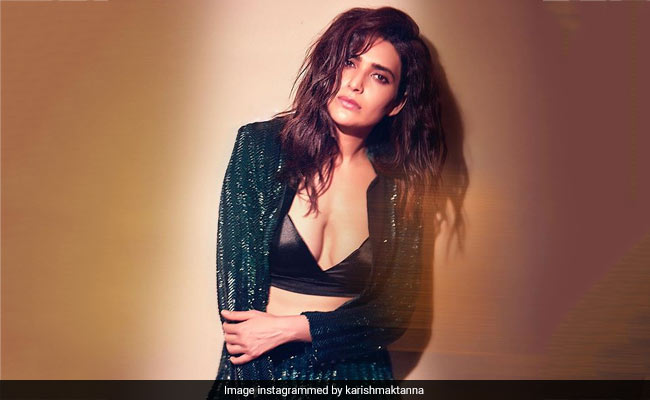 TV star Karishma Tanna says she has made peace with the uncertain nature of the entertainment industry. The actor, who started out with Ekta Kapoor's iconic daily soap Kyunki Saas Bhi Kabhi Bahu Thi in 2001, went on to feature in shows like Ek Ladki Anjaani Si, Bigg Boss season eight and Naagin, which got her further acclaim.

Karishma said initially in her career she was scared of being unrecognised, but over the years she has built a place for herself. "I had the fear of 'out of sight, out of mind'. Now I feel that's not the case anymore. People know me well enough to think about me and suggest my name. But initially, you do feel if you are out of sight, you'll be out of mind too."

"That was my biggest fear because we are in an industry where we feel insecure almost all the time. I don't feel insecure about it anymore. If it's in my destiny and if I deserve that role, I will get it," Karishma told PTI.

The 36-year-old actor believes to survive in the industry one needs to have the right combination of luck and hard work.

"The industry is very uncertain for everyone, film or TV stars. You have to understand that. It's about being at the right place at the right time, luck and your hard work. You have to remain positive and just wait and watch," Karishma said.

The actor has now emerged as the winner of Colors reality show Khatron Ke Khiladi season 10. Filmed in Bulgaria, the series was hosted by filmmaker Rohit Shetty.

As I hold this trophy in my hand , I feel I am holding all the dreams I dared to dreamit feels like I am holding the dream of my mother. Coming from a simple conventional gujurati family it started with. She can't do it . Why does she want to do it? Get an education, get a more secured job, get married,now who will marry her? It's a tough world out there . It's a mans world. How will she survive the competition.. she has no Godfather, no connections .. yes, I had none of those, but what I had and all young boys and girls who venture out of their safety zones to get to their goals have..they have the power to wake up and look beyond the doubts..the faith to look beyond the failure ..the blessings that come from the belief u see in the eyes of ur mother..your friends ur loved ones.. ur FANS I am proud bcz just like everyone else who is here to achieve their goals , I worked hard physically, mentally, technically.. I worked in letting myself believe that yes we all are trying and only 1 will win but the experience will make us stronger , better and together. When @itsrohitshetty sir announced my name, all I could feel is the love of my colleagues who rushed to me wit no bias but only love, the same love and support Wch I felt during every task. I could feel my mother smiling bcz she knows my internal battles, I could feel my father cheering me from above.. lookin at me with pride .. I feel only love and gratitude To this milestone and many more to come Thanku @colorstv @voot @endemolshineind and everyone who prayed for me to reach here . Love you all

Karishma said she wasn't keen on taking part on the show because she found the format of adventure and stunt "scary."

"I feel I made the right decision by taking up the show. I was very skeptical, not confident enough of doing the show because the genre was scaring me. But my mother pushed me. So I took part and I'm so glad it paid off!"

The actor, who was last seen on the big screen in Ranbir Kapoor-starrer Sanju in 2018, said the experience of participating on the show has made her less impulsive.

"I've become more positive, calmer. What I realised on the show was if you''re calm during the stunts, you come out as a winner. Generally before a stunt you''re so scared of the task itself and of other contestants doing it better than you."

"I've learnt calmness from the show. I''m otherwise very hyper, impulsive and the experience has changed me. It has also made me more confident about myself," she added."

Actors Karan Patel and Dharmesh Yelande were named first and second runners-up respectively on the finale, which aired Sunday night.