During one of the intervals between questions, Mr Bachchan jokingly asked the contestant if he is aware of the dating app Tinder. 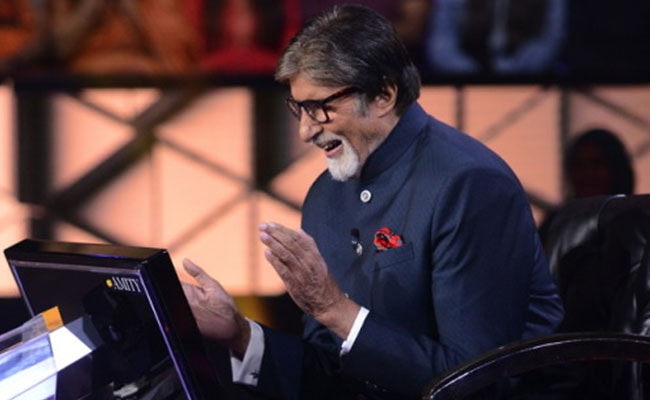 Amitabh Bachchan began Tuesday's episode of Kaun Banega Crorepati 11 with a contestant named Nitin Kumar from Madhya Pradesh. Mr Bachchan learnt from the contestant that he runs his mother's general store in Jabalpur while he's also preparing for UPSC exam. Now, the first question on the show was about 'dimples', which prompted Amitabh Bachchan to sarcastically ask the contestant if he meets many 'dimples' at his store: "Kabhi koi dimple pasand nahi aayi?" Picking up the clue, Nitin said since his store also sells jewellery and cosmetics, he indeed comes across a lot of women customers every day. This made way for Amitabh Bachchan to tease Nitin about if he's fond of anyone in particular.

During one of the intervals between questions, Mr Bachchan jokingly asked Nitin if he is aware of the dating app Tinder. Nitin, clearly blushing at this point, told Big B that he got to know of Tinder from a friend and has indeed tried it out. "What is Tinder?" asked Big B, saying he has heard of the app but isn't quite sure how it functions. At this point, the contestant had to explain how Tinder works, saying "it isn't as famous" and with an added disclaimer that: "Chala hi nahi aur zaroorat bhi nahi padhi. Mera dukaan hi Tinder hai."

Tuesday's episode of Kaun Banega Crorepati was filled with many such ROFL moments. Nitin Kumar went home with a prize money of Rs 3,20,000. The next contestant on the show was Hemant Nandalal from Maharashtra, who played till the 8th question without any lifelines and will continue playing on Wednesday.

Meanwhile, here are some of the questions from Tuesday's Kaun Banega Crorepati episode:

# Which symbol is used to mark goods as environment-friendly?

# In the 2019 IPL, who had the honour of wearing the orange cap at the end of the tournament?

# Who among these was the first IITian in the country to become the Chief Minister of any state?

# What type of animal is the Indian Flying Fox?

# Who has held the position of National Security Advisor of India since 2014?

How many could you answer? Tell us in the comments below. Watch this space for more updates on Kaun Banega Crorepati 11.