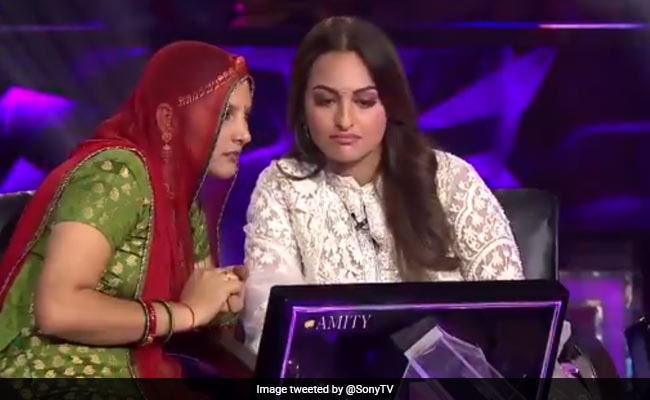 Ruma Devi and Sonakshi Sinha in a still from KBC 11. (Image courtesy: SonyTV)

Tonight's episode of Kaun Banega Crorepati 11 was full of laughter. Entrepreneur Ruma Devi was invited as a Karamaveer contestant in tonight's episode. Ruma Devi, works as an NGO named Gramin Vikas Chetna Sansthan in Rajasthan and she has been constantly working towards promoting traditional Indian handicrafts as a part of which, she has provided employment to over 22,000 women in her area. She is the recipient of several awards and accolades. Bollywood actress Sonakshi Sinha was also there on the panel of special guests, who cheered for Ruma Devi and she played the game with her. Ruma Devi went home with a prize of Rs 12, 50,000.

During the episode, Sonakshi Sinha described Ruma Devi as a "shining example of what women can achieve" and that she is a source of inspiration for women across the country. On a lighter note, when the show's host Big B asked Ruma Devi is she enjoys watching movies, she said that does and that Amitabh Bachchan's Sooryavansham and Son of Sardaar, featuring Sonakshi Sinha, are some of her favourite films.

Before Ruma Devi occupied the hot seat, Akash Kushwaha from Uttar Pradesh played the game. Aakash was yesterday's roll over contestant, who decided to quit the game after the 10th question and went home with a prize of Rs 1,60,000.

Some of the questions asked during tonight's episode were:

According to Ramayana, Hanuman fetched the Sanjeevani herb for whom?

Who became the Chief Minsiter of Odisha for the 5th consecutive time in the year 2019?

Which city is known as the 'Perfume city of India?'