Katrina shared pictures she and Vicky Kaushal took of themselves before they left home "About last night," she captioned them. 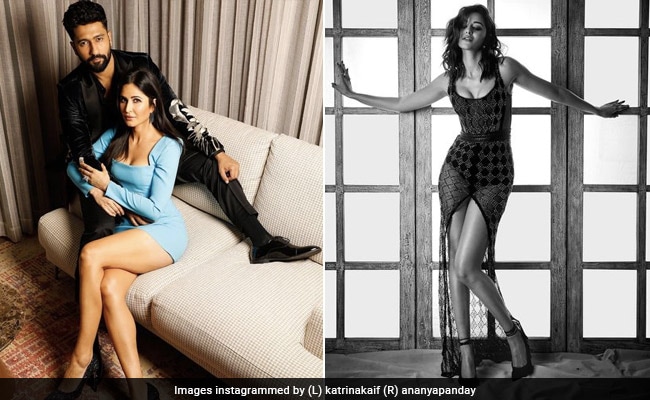 Katrina, Vicky and Ananya in their party looks (Images courtesy: katrinakaif and ananyapanday)

Thursday night was a red letter day in Bollywood's social calendar which has been pretty much empty ever since COVID shut down the world. Karan Johar hosted a blow out party for Dharma Productions CEO Apoorva Mehta who turned 50 and the guest list was stacked with the great and the good of the film industry, all dressed to kill. Katrina Kaif and Vicky Kaushal, Alia Bhatt, Ananya Panday, Janhvi Kapoor and other stars brought their party A-game and while most did not share pictures from inside, they did share the photos they took before heading out.

Katrina Kaif and Vicky Kaushal, who married last December, made a thrilling entry at the party holding hands. On Friday, Katrina shared these pictures the couple took of themselves before they left home – "About last night," she captioned them. Katrina wore a turquoise Alex Perry minidress.

Alia Bhatt also wore a mini – hers was a red floral print topped with a matching blazer. Alia shared pictures of her look, by designer Magda Butrym.

Ananya Panday showed up in a stunning sheer dress with a corset-style bodice by Aadnevik. She posted these pictures of herself.

Janhvi Kapoor wore a mirrored sheath by Manish Malhotra. "They said I needed to reflect," Janhvi captioned her post.

Janhvi's cousin Shanaya Kapoor shared a better look of her pantsuit by Studio Amelia, helpfully describing the colour in her caption: "White."

Shanaya, who is Dharma's newest debutante, also posted a picture with actors Lakshya and Gurfateh Pirzada who will co-star in her debut film Bedhadak.

Parineeti Chopra posed in her edgy black ensemble and asked in her caption, "Is it a gown? Is it a dress?" The outfit, a minidress with a train on one side, looks short from the front and long from the side.

Which is your favourite from these party looks? Tell us in the comments.