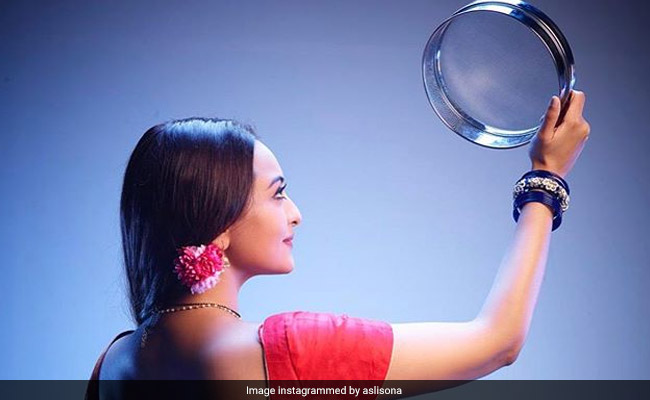 Sonakshi Sinha's Karwa Chauth dhamaka comes with a Dabangg wish from Rajjo. Sonakshi shared her look as Rajjo from the much-awaited Dabangg 3 with a brand new still, which is going crazy viral on social media. In the photo, Sonakshi Sinha can be seen looking at the moon through a sieve (a part of the tradition that married women follow to break their fast on Karwa Chauth) in a blue saree. Sharing the photo, Sonakshi Sinha captioned it in Hindi and wrote: "Rajjo Pandey yaani ki Mrs. Chulbul Pandey ki oar se aap sabhi pativrata aur Dabangg patniyo ko Happy Karwa Chauth." She also accompanied her post with hashtag '#RajjoKaKarwaChauth.'

Sonakshi Sinha will reprise her role as Rajjo in the third instalment of the Dabangg series. Speaking about the film previously, Sonakshi Sinha told news agency IANS: "I think it will be very fun because there is an element in Dabangg series, where artistes come and they do a song for the film. This time there will not be Munni in the song and there will be Munna in the song. So it will be a lot more fun."

Other than Sonakshi Sinha and Salman Khan, other actors, who will reprise their roles in the film are Arbaaz Khan (as Makhanchand Pandey), Mahie Gill (as Nirmala Pandey) and Tinnu Anand (Nirmala's father). Dabangg 3 will also features Saiee Manjrekar, Nikitin Dheer, Kiccha Sudeep, Pramod Khanna, Nawab Shah and Pankaj Tripathi.

Directed by Prabhu Deva, Dabangg 3 is slated to open in theatres on December 20.