Kartik Aaryan was on the sets of Super Dancer Chapter 3, where Shilpa Shetty is one of the judges 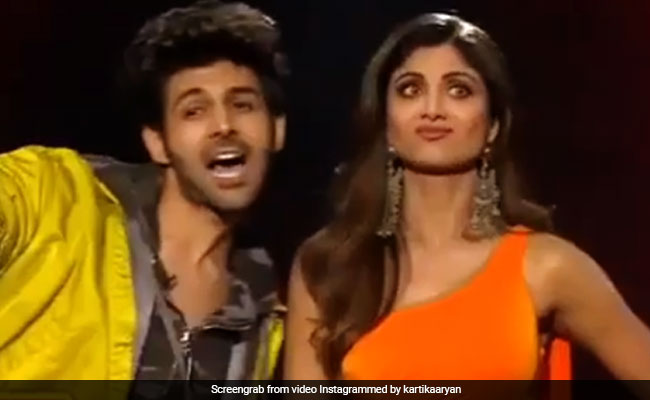 Kartik Aaryan, who is currently busy with the promotional duties of his upcoming film Luka Chuppi, received a huge compliment from none other than Shilpa Shetty. Kartik was on the sets of the dance reality show Super Dancer Chapter 3, where Shilpa Shetty is one of the judges. Kartik shared a promo video of the show on his Instagram profile, in which he and Shilpa could be seen dancing to the song Poster Lagwa Do redux from his film Luka Chuppi. Later, in the video, Shilpa compares Kartik to Akshay Kumar. Needless to say, Kartik was delighted to receive such a huge compliment and that clearly reflects in his expressions in the video as he can be seen blushing.

An excited Kartik shared the video on his Instagram profile and wrote: "KA reminds Shilpa Shetty of AK... Like the younger Akshay Kumar Sir. This is a huge compliment." He also thanked Shilpa Shetty and added, "Thank you super se uper Shilpa Shetty.

A few days ago, Kartik shared a video of himself along with Shilpa Shetty from the sets of Super Dancer Chapter 3 and captioned it : "Luka Chuppi with the stunning Shilpa Shetty."

Shilpa Shetty also shared a selfie with Luka Chuppi stars Kartik and Kriti, from the sets of the show. "Such a cracker of an episode with the pretty Kriti Sanon who's as sweet as a barfi and Kartik Aaryan, who's an absolute charmer and the badshah of monologue. Wishing you guys the very best. Can't wait to see Luka Chuppi," read the caption on Shilpa's post.

Such a cracker of an #episode ( Sunday) with the pretty @kritisanon who's as sweet as a Barfi and #KA @kartikaaryan who's an absolute charmer and the #badshah of #monologue . Wishing you guys the very best .. can't wait to see #lukachuppi . #entertainment #fun #movie #latest #friends #rotfl

Luka Chuppi is a romantic comedy, which has been has been directed by Laxman Utekar. Besides Kartik and Kriti, the film also features Aparshakti Khurrana, Pankaj Tripathi and Vinay Pathak.

Luka Chuppi will open in theaters on Friday.