Kartik Aaryan Got A Special Gift From Karan Johar. He Wishes To Sell It For 2 Lakh "Plus GST"

"I liked an ice-cream at Karan Johar's place and as a kind gesture he sent some home," wrote Kartik Aaryan 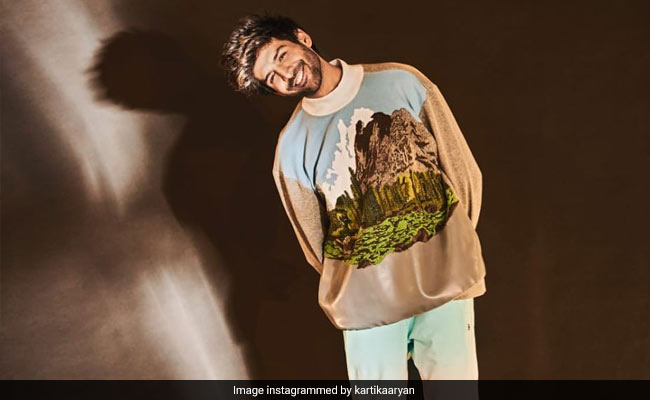 Seems like Kartik Aaryan and Karan Johar's Dostana (pun intended) is not just limited to their forthcoming project together and the Love Aaj Kal actor even shared proof. Karan Johar, whose company Dharma Productions is producing Dostana 2, sent a very sweet gift for his film's lead actor Kartik Aaryan. Kartik shared a video of a vendor, who brought a special gift sent by KJo. He stated that he once liked an ice-cream at Karan Johar's place, so the director sent some for him. Kartik also revealed that he plans on selling it for a whopping sum of Rs 2,00,000 plus GST. "I liked an ice-cream at Karan Johar's place and as a kind gesture he sent some home. I am selling it for Rs 2,00,000 +GST per scoop. We have Gucci and Balenciaga flavours. Bookings open," wrote Kartik.

I liked an icecream at @karanjohar 's palace and as a kind gesture he sent some home. I am selling it for Rs. 2,00,000 +GST per scoop. We have Gucci n balenciaga flavours Bookings open !!

KJo frequently makes appearances on Kartik's Instagram profile. Check out some of the posts here:

#KabhiKaranKabhiJohar Its all about Loving your Producer @karanjohar

Kartik Aaryan made his Bollywood debut with Luv Ranjan's 2011 film Pyaar Ka Punchnama and has been a part of movies such as Pyaar Ka Punhnaama 2, Kaanchi-The Unbreakable, Guest Inn London and Sonu Ke Titu Ki Sweety. In 2019, the actor starred in Luka Chuppi, co-starring Kriti Sanon, and Pati Patni Aur Woh, alongside Ananya Panday and Bhumi Pednekar - both the films performed well at the box office. He was last seen in Love Aaj Kal, opposite Sara Ali Khan. The actor will next be seen in Bhool Bhulaiyaa 2, co-starring Kiara Advani and Tabu.