Kartik Aaryan shared glimpses of the celebration on Instagram 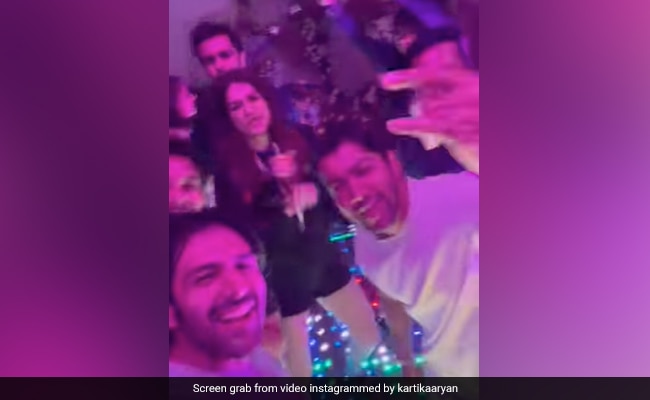 After the huge success of Bhool Bhulaiyaa 2, all eyes are on Kartik Aaryan's next projects, including Shehzada. The film is the official remake of the Telugu blockbuster Ala Vaikunthapurramuloo and stars Kartik with Kriti Sanon. Fans have been hanging onto every update about the much-awaited film and Kartik has often obliged with pictures and videos from the sets. Now, upon wrapping a shoot schedule of the film in Haryana, the team let their hair down and partied hard. Giving us as glimpse of their dance party, Kartik dropped a video and said, “Schedule wrap par party toh banti hai #Shehzada.”

The video features Kartik Aaryan, Kriti Sanon and Rohit Dhawan, the director of the film, dancing to the title track of Desi Boyz. Desi Boyz was also directed by Rohit Dhawan. The video shows Kartik, Kriti and the team dancing their hearts out, with Kartik recording the selfie video.

Kartik Aaryan has also shared another video in which fans can be seen outside the shooting location, waiting for the actor only to erupt into loud cheers at the sight of him. Kartik is seen walking towards the gathering of fans – who are separated from him by a gate – and interacting with them briefly.

In the caption, he said, “Thank you, Haryana, for giving so much love to Shehzada.”

Recently, Kriti Sanon also celebrated her birthday on the sets of Shehzada. Kartik Aaryan shared an image of him feeding Kriti some birthday cake. Kartik wrote, “Diet nahi todi ladki ne. Sirf pose kiya mere liye. Happy birthday Param Sundari. From your Shehzada ( The girl did not cheat on her diet. She just posed for me).”

Kriti replied, "Thank you for having all the cake after posing."

Actor Ankur Rathee also shared glimpses of Kriti Sanon cutting a cake on set and said, “May you receive everything your heart desires birthday girl Kriti Sanon. And also that's a wrap for Team Shehzada in Haryana."

Shehzada is Kartik Aaryan and Kriti Sanon's second movie together after Luka Chuppi. The original Ala Vaikunthapurramuloo was written and directed by Trivikram Srinivas with Allu Arjun and Pooja Hegde in the lead roles.

Koffee With Karan 7: Gauri Khan Addresses Aryan Khan's Arrest - "Nothing Can Be Worse Than What We've Just Been Through"